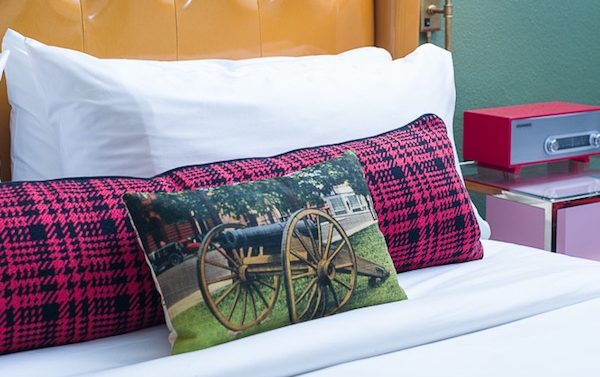 The Foundry Park Inn & Spa is being renovated into a boutique hotel and will be rechristened Graduate Athens in October, Chicago-based hospitality and real estate company AJ Capital Partners, which bought the property earlier this year, announced Thursday.

Music venue The Melting Point is being renamed the Foundry, and the Hoyt House has been converted into four suites.

The piece-by-piece renovation has been underway for some time, but the company gave details about what it will look like. Graduate (GraduATE? GraduUT?) Athens is being billed as “an intellectual return to the glory days of college,” with “a rich color palette accented with bright florals, classic Southern haberdashery and fresh modern elements… an impressive collection of locally sourced vintage art, as well as contemporary art that references the community and university,” according to the press release.

(I’m not sure what men’s clothing has to do with this.)

According to a Wall Street Journal article, AJ Capital Partners is investing $500 million over the next five years in hotels in 20 college towns, including Tempe, AZ, Oxford, MS, and Charlottesville, VA. The goal is to draw affluent middle-aged sports fans, alumni attending reunions and parents visiting their children. In other words, nostalgia.

In Athens, Ga., Graduate is converting the Foundry Park Inn & Spa with plans to open the property in October. The rooms will include vintage ceramic lamps in the shape of the University of Georgia’s bulldog mascot, while album covers from REM and the B-52s, bands that got their start in the southern town, will adorn the walls. So will photos of Italian fashion designer Emilio Pucci, who studied agriculture at the school.

Which, to this longtime Athens resident, sounds kinda cheesy. (I mean, just look at that double-barreled cannon pillow.) But I bet out-of-towners eat it up.

Oh, and Pucci really did study agriculture at UGA, briefly.

UPDATE: In regard to the Melting Point, soon to be the Foundry, a representative for Graduate (apparently it’s the noun, not the verb; y’know, like the movie) tells Flagpole that, aside from some physical renovations to the venue, “all that’s changing is the name,” saying the current management team will remain in place.