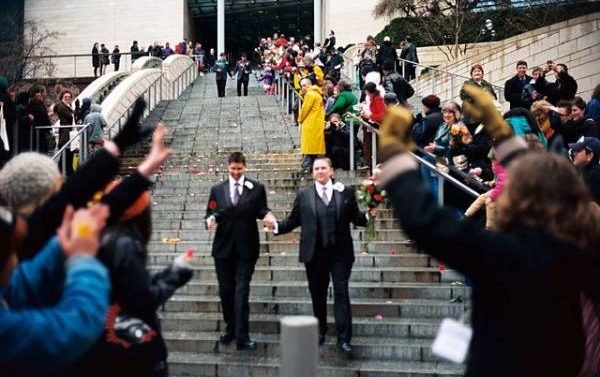 Georgia has joined the more than 40 states where lawsuits seeking to overturn a ban on same-sex marriage have been filed.

Lambda Legal, a nonprofit devoted to gay rights, filed suit this morning in U.S. District Court challenging the amendment to the state constitution banning same-sex marriage and civil unions that passed in 2004. GA Voice interviewed two of the plaintiffs.

Gay-rights advocates have racked up a string of legal and political victories lately. Same-sex marriage is now legal in 17 states (some due to lawsuits and others at the ballot box) and stays are pending in five others.

FOR IMMEDIATE RELEASE (Atlanta, April 22, 2014) – Today Lambda Legal filed a federal lawsuit in the U.S. District Court for the Northern District of Georgia on behalf of a widow and three same-sex couples challenging Georgia’s discriminatory marriage ban.  The case was filed on behalf of Christopher Inniss and Shelton Stroman of Snellville, Rayshawn Chandler and Avery Chandler of Jonesboro, Michael Bishop and Shane Thomas of Atlanta, and Jennifer Sisson of Decatur.

“Georgia is our home. Our family is here, our business is here, and our community here is a great support for us,” said Christopher Inniss, veterinarian and pet resort owner. “Shelton and I have been together for 13 years. We own a home together, we own a business together, and we are raising our son, Jonathan, together. We have done everything we can to protect and take responsibility for our family but marriage is the only way to ensure that we are treated as the family that we are. We need the protection that marriage affords.”

Lead plaintiffs Chris, 39, and his partner Shelton Stroman, 41, have been together for 13 years. Their son, Jonathan, is 9.

“Every day that same-sex couples in Georgia are denied the freedom to marry, the government sends a message that their families are not worthy of dignity and respect,” said Tara Borelli, Senior Attorney in Lambda Legal’s Southern Regional Office based in Atlanta. “Georgians believe in the Southern values of love, honor and family, but as long as the State of Georgia continues to bar same-sex couples from marriage, it devalues these families and reinforces unfairness and discrimination.”

“Georgia joins a growing chorus of Southern voices clamoring for marriage equality. The freedom to marry is indeed coming south. We do not want a country divided by unfairness and discrimination. Same-sex couples are in loving, committed relationships in every region of our nation and should be treated the same way, whether they live in the Empire State or the Peach State,” said Beth Littrell, Senior Attorney also based in Lambda Legal’s Southern Regional Office.

Joining Inniss and Stroman as plaintiffs in the lawsuit are: Rayshawn Chandler, 29, and Avery Chandler, 30, Atlanta Police Department police officers who have been together for almost three years; Michael Bishop, 50, and Shane Thomas, 44, together for seven years and the parents of  two children; and Jennifer Sisson, 34, whose wife, Pamela Drenner, died on March 1 at age 49. Jennifer and Pam were married in New York in 2013. Despite being legally married, the State of Georgia has refused to list Jennifer as Pam’s wife on Pam’s death certificate.

In the lawsuit, Lambda Legal, joined by pro bono co-counsel from Bryan Cave and White & Case, argues that Georgia’s marriage ban unfairly discriminates against same-sex couples and sends a purposeful message that lesbians, gay men, and their children are second-class citizens who are undeserving of the legal sanction, respect, protections, and support that different-sex couples and their families are able to enjoy through marriage.

“Today’s filing represents a critically important step in the ongoing work toward marriage equality in Georgia. Georgia Equality stands with these inspiring couples in their fight to enable more than 21,000 same-sex couples and their families living in Georgia the freedom to marry the person who they love,” said Jeff Graham, Georgia Equality Executive Director.

The case is Inniss v. Aderhold.

Athens Power Rankings for the Week of Apr. 21