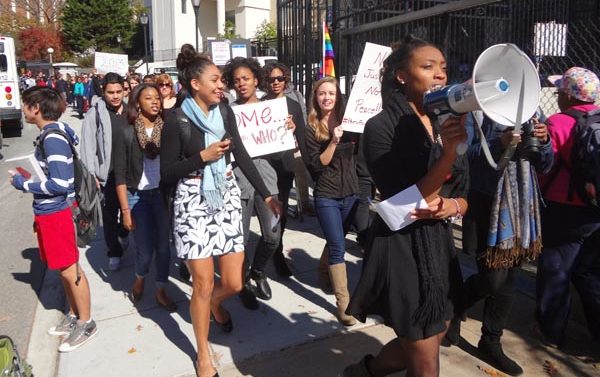 Hundreds of University of Georgia students and community activists marched over the Sanford Drive bridge today to call attention to racism and homophobia on campus.

Caroline Bailey, a UGA student and president of the university’s Black Affairs Council, organized the march after someone posted “Why can’t you dumb dirty niggers stop stinking up the place? Let UGA be RIGHT for good WHITE Christian students,” to the council’s Facebook page.

The message was posted anonymously using an account created in the name of a UGA student, but according to university police, someone else started the account with his name. UGA’s Equal Opportunity Office is investigating.

Bailey said she was “very, very disheartened,” that someone could post such a message 50 years after UGA began admitting black students.

“This isn’t just about a Facebook post,” said Adrianna Adreanna Nattiel, a self-described black, queer student. “This is about a culture on campus that says this kind of thing is OK.”

While the Facebook post sparked the march, activists used the occasion to call attention to other issues—inequality for gays, lesbians, bisexuals and transsexuals, and the Board of Regents’ policy barring undocumented immigrants from attending UGA.

“I graduate in May,” said Yami Rodriguez, president of the Undocumented Students Alliance. “Sadly, I will be graduating from a segregated university.”

Students said they were especially outraged because it was homecoming weekend. They tweeted from the march using the hashtag #home4who.