Should Athens Have a Curfew in Public Spaces? 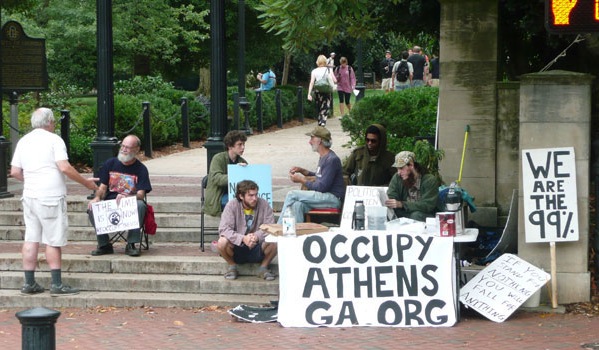 About a dozen people came to the Athens-Clarke Commission meeting to speak out against a proposed law, aimed at protesters, that would set hours for public spaces like the City Hall grounds.

Many speakers were associated with Occupy Athens, the group that camped outside City Hall for four days last year, prompting Mayor Nancy Denson to assign the commission’s Legislative Review Committee to consider an urban camping law that originally would have banned sleeping outdoors on public property.

In addition to First Amendment concerns, speakers raised concerns about how the law would affect homeless people. “If you are using us to kick out the homeless people, that’s really despicable, so I’m assuming it’s not that,” Chris Dowd said.

An urban camping law in Atlanta led to that city being named the fourth-meanest to homeless people, said Tim Denson (no relation to Nancy). “I don’t think that’s something for us to look up to,” he said.

In its current form, the law would allow county officials to set hours of operation for all public spaces. (Many parks already open at sunrise and close at sunset, although hours at some parks like the North Oconee River Greenway aren’t enforced.)

A curfew is in conflict with the downtown master plan’s emphasis on public gathering spaces like a new park and plaza outside of City Hall, Maureen McLaughlin said.

Nor does it fit with plans to extend the greenway and build the Firefly Trail, Lauren Blais said. “It doesn’t make sense to me to take an avenue people use in the morning and afternoon and deprive them of it at night,” she said.

“We do not have curfew legislation before the committee,” she said, even though LRC members asked ACC Attorney Bill Berryman last month to draft language allowing officials to set hours for public spaces.

“I assure everybody out there there’s no intention to disenfranchise or eject homeless people or infringe on anybody’s First Amendment Rights,” Denson said. “What we’re trying to do is make sure our laws on the books are clear and understandable by everyone.”

Commissioner Kelly Girtz, the LRC chairman, said he’s participated in many protests, and most were peaceful and productive.

But a few protesters have interrupted funerals or damaged public property, he said. “We’re not targeting the homeless in any way, or protest activities,” he said.

Girtz said he is “specifically disinterested” in an urban camping law like Atlanta’s.

Even if the law clears committee, it may have a difficult time winning passage.

“I haven’t perceived a problem to be solved,” said Commissioner Jerry NeSmith, who is not on the LRC.

The LRC is scheduled to meet next at 5:30 p.m. May 21 in Room 301 of City Hall. As Occupy’s Denson noted, the meetings are hard to find because every door but the one in the basement around back is locked.

Last month, “it very much seemed like the building was closed,” he said.

Flagpole Premieres: k i d s, ‘Give it Up’ Video