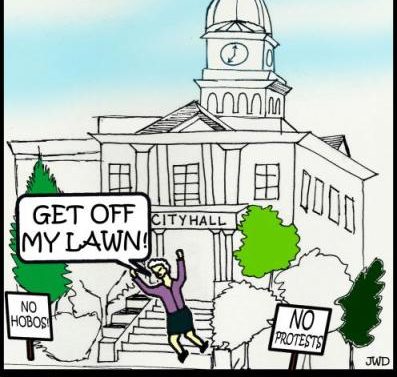 Tim and Jenny Denson of Occupy Athens submitted this cartoon and commentary depicting Mayor Nancy Denson as a modern-day Mr. Wilson for supporting a proposed law restricting when people can be on public property.

The Athens-Clarke County Legislative Review Committee met this past week and continued to discuss the law that would impose “Limitations on Use of Public Right-of-Ways and Unified Government Owned Properties.” It has been openly admitted by public officials that this law is in response to the Occupy Athens protest that occurred in March of 2012. With that seeming like such a petty reason to create a law, many people worry that it might also be directed at the area homeless population. This proposed law was assigned to the LRC by Mayor Denson herself last year and has been brought back up this year.
The repercussions this law would have on First Amendment Rights and on the ability of homeless people to live are obvious to everyone but our Mayor and Commission it seems. This “Get Off My Lawn” mentality by Mayor Denson shows that she might be out of touch with not only young people but the First Amendment and Empathy also. It looks like it’s about time that the people of Athens tell Mayor Denson to “Get Off My Rights!”