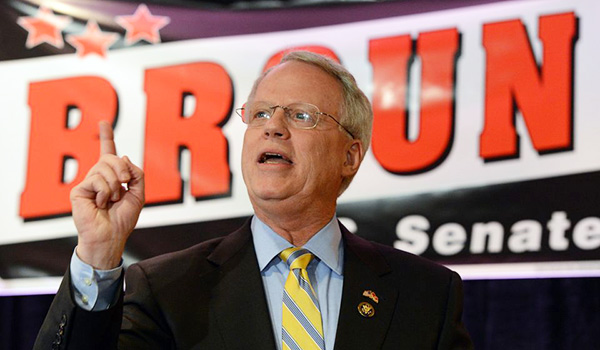 Paul Broun is king of the jungle.

Athens’ Republican congressman, now a U.S. Senate candidate, is a big-game hunter who got his start in politics lobbying for Safari International. National Review recently profiled him, and apparently hollandaise is not a lie straight from the pit of Hell.

Broun doesn’t hunt just for the trophies. “If I shoot it, I’m gonna eat it,” he says. His warthog was particularly toothsome. “It’s actually pork,” he explains. “I had roast warthog, it was cooked in a French style. I’m a French cook myself, and I like to cook things with some fancy sauces and stuff that I’ll make at home. That was excellent.”

The only thing he didn’t especially care for was the lion. “The lion wasn’t particularly tasty,” he says. “It was kind of chewy, but I ate it too.”

I guess the whole “freedom fries” thing is over and done. Paging John Kerry: It’s OK to sound French again!

Broun told me a similar story when I interviewed him for the Athens Banner-Herald in 2007.

You’re an avid hunter. What kinds of animals have you killed?

In my office in Washington, I’ve got a full-body mount of an African lion and a Kodiak bear and a red stag from Argentina, an eland, a cape buffalo, a wart hog and myala, that’s a type of antelope from Africa. I’ve hunted wild mountain sheep in Africa, as well as Spain and Pakistan.

What was the reaction when you brought in all those trophies?

The Capitol police had to check it out. They’d never seen anything like that (laughs). They had to sniff it out for bombs and drugs. Every time I have another member of Congress come in the office, they had the same reaction. They all say ‘Wow!’

You eat everything you kill. What does a lion taste like?

What’s the best-tasting game you’ve had?

It’s the warthog. It is truly pork. When you’re on a safari in Africa, they fix a dish that’s absolutely out of this world.