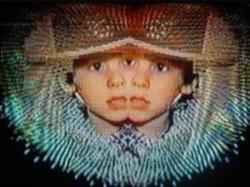 If you haven’t been paying attention, you’ve been missing out one one hell of a creative evolution over in The Dream Scene‘s camp. The nebulous project, the brainchild of Javier Morales (Grass Giraffes, Quiet Hooves), has existed in some form for years (if you’re unfamiliar, check out Morales’ excellent collection of Christmas covers), but Morales has only relatively recently begun treating it like a real-live band, performing knock-em-dead, Prince-would-be-ashamed sets at various locales like Go Bar and Farm 255.

“Escape,” a song posted to the group’s Soundcloud page a couple days ago, is perhaps the most potent and immediately accessible tune The Dream Scene has put forth to date, a creepy, candy-coated four-minute burst of pop pleasure. Morales has been busy over the past several months, posting new tunes online every so often—no word yet on when an official album is coming.