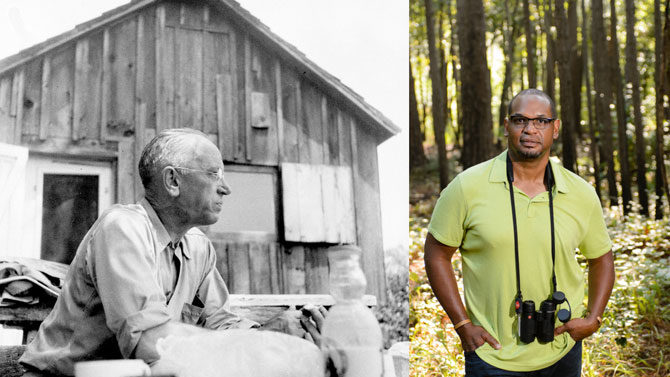 Apr. 22 will be the 50th anniversary of Earth Day. That whole week, Earth Week will be celebrated in Athens and around the world.

In preparation, there will be events throughout the month of March as part of “Aldo in Athens.” These propgrams will celebrate the work of A Sand County Almanac author Aldo Leopold and follow in his spirit of conservation.

To reflect back for a moment on the history of Earth Day, watch a clip of Walter Cronkite on CBS News from the first Earth Day in 1970. The broadcast illustrates many parallels to the environmental movements of today. The holiday was founded, after all, as a demonstration to draw attention to what was referred to even then as the environmental “crisis.” Images of high school and college students taking to the streets echo the contemporary youth climate strikes led by 17-year-old Swedish Greta Thunberg.

In the 1970 report, Cronkite points out that, for many, that first Earth Day was a massive success with high turnout. He goes on to point out why some thought of it as a failure: the homogeneity of participants, who were “predominantly young, predominantly white, predominantly anti-Nixon.” This serves as a reminder that the criticisms facing the environmental movement have been largely similar since its inception. The field of conservation, of which Aldo Leopold was pioneer, is also not one typically known for its diversity.

Drew Lanham, an ornithologist from Clemson University who will be leading a series of the Aldo in Athens events, addresses this head-on in his work. In an interview with National Geographic, Lanham cites Leopold as one of his key influences. He references a quote from Leopold, “conservation is a state of harmony between men and land,” which Lanham extends to include people of all genders, cultures and skin colors. It is vitally important, he says, that we ask people about their relationship and connection to the land, what it brings to them, and how it makes them feel. “Once you begin to understand how people think about land, then we can go forward to help people in informed ways,” he says. Only with this important bridge can we take positive action steps.

According to Lanham, there is a gap between scientific research and the public, and the strength of Leopold’s writing was his ability to bridge that gap by “connecting head to heart.” Leopold became widely known through his writings about the land he grew up on in Iowa, and later the farmland his family bought and set about restoring in Wisconsin. Though he is a renowned scientist himself, his writings are accessible to the general public and have served for several generations as a great inspiration to nature lovers from all backgrounds. He writes from a place of love and reverence.

Like Leopold, Lanham has written about growing up on a rural family farm in Edgefield, SC, in his memoir, The Home Place: Memoirs of a Colored Man’s Love Affair With Nature.

Lanham will speak alongside Clarke County high school students at the Athens Regional Library on Friday, Mar. 27, from 7–9 p.m. about their thoughts and reactions to A Sand County Almanac. He will then lead a bird walk on Saturday, Mar. 28, from 8–11 a.m. at the State Botanical Garden, followed by a gathering with the Athens Land Trust youth program at Williams Farm (registration required).

The monthlong Aldo in Athens offers many opportunities to get outside and take guided nature walks in various Athens locations. These include the University of Georgia campus, Sandy Creek Nature Center, Tallassee Forest Nature Preserve, the State Botanical Garden, a privately owned conservation easement, and a location in an old-growth forest disclosed only upon registration. There will also be a screening of award-winning documentary GreenFire: Aldo Leopold and a Land Ethic for Our Time, on Thursday, Mar. 19 at 7 p.m. at the Athens Regional Library. For a full list of events, visit accgov.com/9168/Aldo-in-Athens-Events.