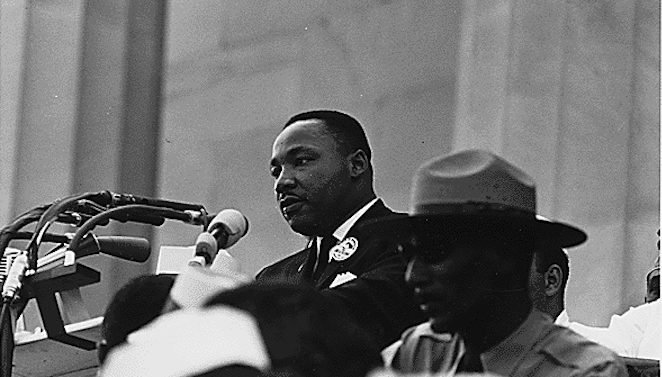 Every year, I ask myself questions about the shameful exploitation of Martin Luther King Jr.: Why do Americans love to disgrace his message so much? Why is it so popular that we see it year after year?

Remember last year? Trump was talking about “s@!#hole countries” while tweeting “I encourage all Americans to observe this day with appropriate civic, community, and service activities in honor of Dr. King’s life and legacy.” What is to stop longtime racists like Rep. Steve King from copying and pasting a quick quote into their Twitter feeds? Last year he posted: “Ive [sic] been to the mountain top. And I’ve seen the promised land… we, as a people, will get to the promised land.” And yet his long list of racially offensive comments and associations with avowed white nationalists, recently published in The New York Times, reveal his use of Dr. King’s words to be a snide mockery.

Of course, the GOP has recently, finally, taken a moment to be critical of Steve King’s flagrant white supremacy in 2019, but they still refuse to comment on the same racist behavior from President Trump. Minority leader Kevin McCarthy said about King’s outlandish comments defending white nationalism, “That is not the party of Lincoln, and it’s definitely not American.” Great. Now how about Trump’s longtime racism? Trump’s “My Kevin” (Trump’s nickname for him when McCarthy was House Majority Leader) doesn’t get this, hence more MLK Day whitewashing.

Sadly, Trump’s Kevin is wrong; racism has never been beneath the “dignity of the party.” Nothing is more Republican than racism—a wall serves as a modern-day burning cross and the rallying point of contemporary bigotry. Nothing is more American than racism—the country’s vast fortunes were built on slave labor and theft of land from indigenous people. Nothing could be further from the message so many in the GOP copy, paste and ignore: “Darkness cannot drive out darkness; only light can do that. Hate cannot drive out hate; only love can do that.” It is the kitsch of far-right Rep. Barry Loudermilk and politicians across the country, cynically misappropriating words they neither earned nor deserve.

A firm commitment to Trump’s racist promises isn’t just cowardly; it is antithetical to the love that Martin Luther King Jr. preached. Teen Vogue, in a great piece on MLK one year ago, gets it better than these jellyfish do. MLK was radical in his support of the love supreme Jesus preached: “Nonviolence is absolute commitment to the way of love. Love is not emotional bash; it is not empty sentimentalism. It is the active outpouring of one’s whole being into the being of another.”

His message was his life, and justice was not an accessory. Trying to score some easy political points by pretending to condemn racism for a second fails the larger picture. “It is not enough to say we must not wage war. It is necessary to love peace and sacrifice for it.”

In a country with too many warmongers, “the ultimate measure of a man is not where he stands in moments of comfort and convenience, but where he stands at times of challenge and controversy.” Leaders who’ve sacrificed are rare, the pronouncements we hear are for expedience, and those making empty declarations simply don’t measure up.

The failures are not just at the level of leadership. As citizens, MLK provided us with clear guidance: “What are you doing for others?” “Change,” he told us, “comes from continuous struggle.” Are we living up to these instructions?

“The Dream” is not a feel-good story. It is the story of resistance and struggle. This is why few things could be more offensive than sanitizing his words and using them with the intention of pacifying the oppressed. MLK spoke to defend those who demanded equal pay and equal access—people were tired of being pushed around. Forget “our party freed the slaves” and think about the ongoing need for dignity and equality. MLK died in solidarity with sanitation workers—maybe you can stick up for those furloughed or out of work in a racist and classist political stunt. We’ve got to get past the sentimentality.

When MLK spoke to us, he pressured us to look deeper and bigger. “True compassion is more than flinging a coin to a beggar. It comes to see that an edifice which produces beggars needs restructuring.” The gap between the rich and the poor is only growing, and trillion-dollar tax giveaways to the rich are not helping. “The war in Vietnam is but a symptom of a far deeper malady within the American spirit,” and his observance of our ubiquitous engagement in violent conflict continued that it would not end until “there is a significant and profound change in American life and policy.”

So, finding quotes is easy, but this last one is key: “Our only hope today lies in our ability to recapture the revolutionary spirit and go out into a sometimes hostile world declaring eternal hostility to poverty, racism and militarism.” The cowards cannot get behind the radical message, and they will not get there on their own; “there is a promised land,” but don’t forget it was envisioned by Martin Luther King working for the Poor People’s Campaign, uniting poor whites, blacks, native Americans, Latinx and many others. That’s the Martin Luther King Jr. coalition, not the Rep. Steven King segregated fan group.

Wim Laven, an instructor of political science and international relations at Kennesaw State University, is syndicated by PeaceVoice.