End Homelessness Now to Protect Them From Climate Change 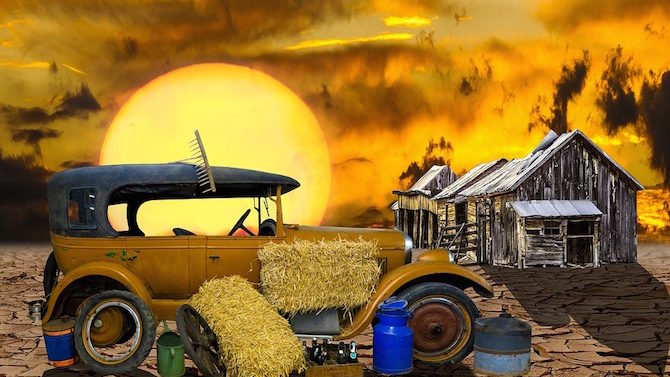 Our future has been written, and what we make of it will become increasingly important in the coming decades.

Climate change is no longer a problem of the future; it is a problem of the present. Defiant politicians, governments, corporations, oil executives, automobile manufacturers, lobbyists, climate deniers and others have left us with a future guarantee of violent weather, increased temperatures, drought, ocean acidification, sea level changes, polar ice cap destruction, crop failures, widespread famine, the spread of diseases, increased migration and the destruction of animals and ecosystems—as well as the very real potential for catastrophic, runaway climate change. These outcomes are no longer mere speculation—they are the new norm. The only option we have now is to adapt and attempt to lessen such effects in whatever way possible.

According to NASA, our planet has already warmed an alarming 0.99 degrees Celsius. A recent report from the United Nations’ Intergovernmental Panel on Climate Change states that there are only 12 years left to prevent Earth from reaching 1.5 degrees Celsius, a temperature that may prevent coral reefs and the Arctic from being completely destroyed.

There is debate whether these numbers are achievable given time, infrastructure, politics, lifestyles and so on. Many of us are already feeling the negative effects of climate change, and some more so than others. Climate change disproportionately negatively affects marginalized populations, such as those living in the Global South (i.e., countries that were colonized by the West), those living in low-income nations, those living in tropical climates and island nations, people of color, women, elders, the poor and people experiencing homelessness, to name a few.

The first assumption that needs to be challenged is that homelessness is inevitable, and that it cannot be solved. The United States government spends 54 cents of every discretionary dollar on war and militarism. President Trump’s 2017 military budget was $700 billion. We have the money to house and feed every person in the U.S.—particularly people experiencing homelessness—but we choose not to.

The second assumption is that people experiencing homelessness are mentally ill. While spending extended periods of time without a house or apartment may predispose someone to have health issues—and the portion of people experiencing homelessness that are neurodivergent is certainly higher than the U.S. population—it is much lower than expected, around 25–30 percent.

The last assumption is that shelters are a solution, and that they are humane. While homeless shelters are a means to an end, they unfortunately often become an end. Shelters can be dangerous, paternalistic, controlling and may increase psychological problems in certain cases.

Much of this is exacerbated by climate change, and there is no longer an excuse for the number of people experiencing homelessness in Athens. People may die due to climate change effects. The city needs to aggressively address the issue of homelessness by utilizing Housing First solutions that are participatory—this means including people experiencing homelessness in decision-making processes. This doesn’t mean tokenized roles on committees that go nowhere, poverty porn photo-ops with commissioners, and assumptions that people want to (and deserve to) live in tiny houses the size of parking spaces. This means actual autonomy and control over decision-making about housing—dignity.

For all the student housing that has Atlanta-fied downtown, the city should provide housing or alternatives for those who need it, full stop. Social services should not continue to pathologize and medicalize poverty and human difference by focusing on drug abuse, misuse and mental illness. While these are certainly components to homelessness that need attention, they shouldn’t be the first step, nor should they be a requirement for housing.

Given the health risks related to climate change, more cooling and warming shelters should be opened for people experiencing homelessness to escape everyday ravages that we privileged individuals avoid. Shelters are not a solution, but given the potential outcomes of runaway climate change, they are an unfortunate necessity. As children of the Cold War, we feared our future would end from nuclear apocalypse—mutually assured destruction, they called it. Now, as children of climate change, we fear how our past has caught up with us, and how it may spiral out of our control.

Because our future has been written, and what we do or fail to do will either lessen or increase the negative outcomes of this future, it’s imperative that we adapt. Ending homelessness is no longer a choice; it’s an obligation.

Izlar is a PhD candidate in social work at the University of Georgia and a Food Not Bombs organizer.