Brian Kemp and the Triumph of Mediocrity 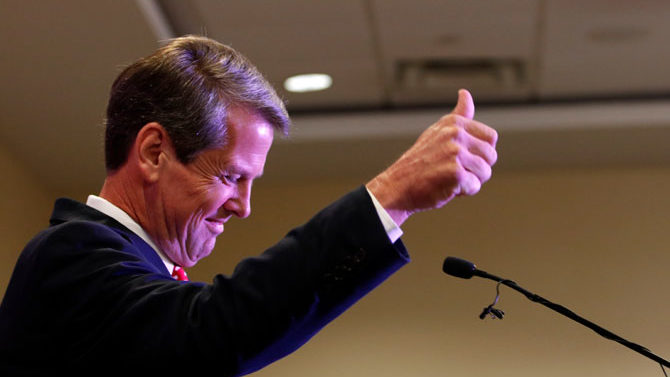 In politics, as in sports, it is often better to be lucky than good. By any measure, Brian Kemp has been a very lucky politician.

For starters, it didn’t hurt to marry well, which Kemp certainly did. His wife Marty is a political asset—intelligent, a former UGA cheerleader and the daughter of Bob Argo, the late Athens businessman and highly regarded member of the Georgia House of Representatives from 1977–1986. Though a longtime Democrat, Argo was more than willing to support his son-in-­law’s race for Senate District 46 in 2002 as a Republican.

Kemp waited to make his move only after Paul Broun Sr., the 38­-year Democratic incumbent, had been upset by Doug Haines in 2000. Aided by the Argo family connection and some residual bitterness on the part of Broun’s former supporters, Kemp defeated Haines in 2002 by 489 votes. Benefiting from a court-ordered revision of SD 46 that tilted the district further Republican, he won again in 2004 in yet another tight race.

To describe Kemp’s four­-year tenure in the state senate as lackluster would be charitable. As one of his colleagues from that era recalls, Kemp was an indifferent legislator: “Substance was not his strong suit.” Yet Kemp was known to have his eye on statewide office.

One clue to the breadth of his ambition was the numerous resolutions he sponsored recognizing individuals or organizations for their achievements and, in some instances, offering condolences for a death. Over his two terms, the low-profile ­­but politically canny­­ Kemp sponsored 213 such resolutions, many targeting his SD 46 constituents.

Another clue was his early appreciation of the political utility of map rigging. In 2006, perhaps tiring of close elections and seemingly unconcerned about the conflict of interest, Kemp supported a bill reconfiguring SD 46 so that Clarke County—a Democratic Party stronghold—would be broken up, making SD 46 a very safe Republican seat. That seat has been held since by Sen. Bill Cowsert, who also married into the Argo family. The Republican Party was showing signs that its zeal for competition in the marketplace did not extend to the political sphere.

Kemp uncharacteristically ventured out of his political comfort zone in 2006 and got pummeled for it. His good ol’ boy persona camouflaged an ego that exceeded his modest accomplishments and overrated his limited experience. Instead of seeking re-election in the friendly confines of the newly remodeled SD 46, he decided to run for secretary of agriculture. Without the built-­in advantages of SD 46, Kemp lost badly in the Republican primary to the far more qualified Gary Black. Back to Athens and political obscurity Kemp went.

In 2009, Kemp’s fortunes changed for the better. Secretary of State Karen Handel resigned to run for governor. Outgoing Gov. Sonny Perdue had to fill the vacancy. His first choice, Jim Cole, his Republican floor leader in the House of Representatives, withdrew from consideration. The prize fell into Kemp’s lap. Perdue appointed Kemp secretary of state, handing him something he might never have achieved on his own—statewide office. More than that, this meant that when Kemp faced the statewide electorate in 2010, he would be in the advantageous position of running as a Republican incumbent. It would not be the last time that Perdue was Kemp’s political sugar daddy.

Kemp’s tenure as secretary of state has been marked by controversy. It reflects two recurring themes: an exaggerated fear of the statistically non­existent phenomenon of “voter fraud,” and an equally exaggerated suspicion of voter registration campaigns perceived as challenging the Republican Party’s grip on power in Georgia. If it means shrinking the electorate to ward off these phantom threats, Kemp has been quite willing to rig the system to boost the political fortunes of the Republican Party in Georgia.

Kemp understands that he can win by losing. He has the power to force disadvantaged or gerrymandered voters to expend time, effort and money, usually through litigation, ­­to force him to do what should have done in the first place. Government lawyers and taxpayer dollars are used to defend his unconstitutional and regressive policies and practices. Kemp takes full advantage of this leverage and the delay it causes.

Despite his pieties about election integrity, Kemp has shown little sense of urgency about protecting the system against potential hacking, whether by the Russians or from some other threat. He has also dragged his heels about upgrading voting machines that generate a paper ballot trail in the case of a computer failure, as many U.S. states have done. If a Democrat had Kemp’s record of indifference and ineptness, the howling would be ceaseless.

In the recent Republican primary for governor, Casey Cagle looked to be in a strong position to win over Kemp in the runoff. But Kemp had the good luck to run against an opponent who was caught on tape talking about voting for admittedly “bad legislation” to protect himself politically. Cagle also made the mistake of telling the truth about Kemp’s “crazy” right-­wing politics. By itself, this might have cost Cagle the Republican primary runoff. But perhaps the best stroke of luck for Kemp was the reappearance of his longtime political sugar daddy: Perdue, now secretary of agriculture in the Trump Administration.

Just days before the runoff, Perdue got President Trump to endorse Kemp over Cagle. Trump knew next to nothing about Kemp, other than that he was a Republican and a Perdue buddy. It worked. Kemp crushed Cagle and is now the Republican nominee for governor. No politician in recent Georgia history has advanced so far on such a meager record.