Are Tiny Houses a Solution to Athens’ Affordable Housing Problem? 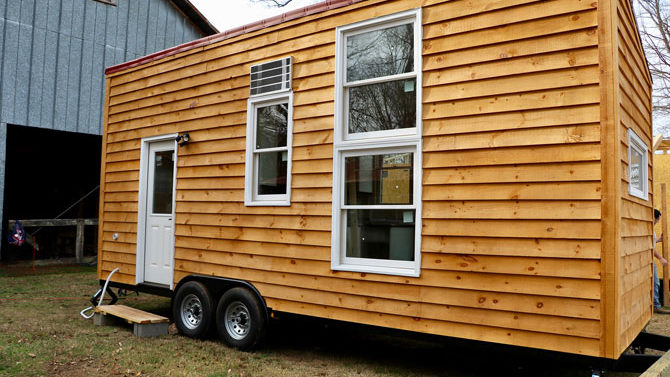 Over the past few years, it has become harder and harder for many people in the workforce to afford the rising cost of housing. Athens-Clarke County did a workforce housing study last year that showed housing costs have increased while incomes have not.

I’m one of many people who has had to move out of Athens (to Oglethorpe County) because of the rising cost of housing in Athens. I have built a tiny house to live in, but ACC doesn’t have zoning that allows for tiny houses.

There are many locations in Athens where a community of about 10–20 tiny houses could be developed. There would be a monthly fee, and all residents would be required to help maintain the property. Now, here’s the beauty of the plan: The residents would be of all ages, from all walks of life, but all people who want to simplify their lives, as well belong to a community with people interacting with each other and looking after each other—such as seniors helping with childcare for working parents, while those parents help with household chores and errands in return. Picture a community garden, green space, a clubhouse for meetings or parties that wouldn’t fit into a tiny house.

What’s holding this plan back from being approved? ACC doesn’t allow houses of less than 1,000 square feet in single-family zones, or 500 square feet in multifamily zones. UGA even has a course where the students build a tiny house, but when they’re completed, they’re moved elsewhere.

Tiny houses are affordable for many people who wouldn’t be able to buy a house in Athens or even afford the skyrocketing rents that landlords are demanding. UGA students’ parents, in many cases, are willing to pay whatever price is asked in order for their offspring to live wherever their hearts desire. It’s now common to see rents of over $2,000 a month for a house that’s nothing special except for its proximity to downtown. And growth downtown has mainly been gigantic student-housing developments and hotels. The people who actually live and work here, the people who keep the town humming, are now being forced out so the students can live wherever they’d like.

A growing number of people are familiar with tiny houses—mostly because of TV shows that showcase various ones and the people who live in them—but for those who are not, tiny houses are not eyesores, glorified trailers or ramshackle hovels held together with duct tape. They are traditional houses, just on a smaller scale. The people who choose to live in them are mainly people who’ve decided to simplify their lives by getting rid of stuff they no longer want or need. Many are young people who are just getting started with their adult lives and can’t afford to buy a house yet. Many are trying to reduce their carbon footprints—solar energy is commonly used when possible. Many people are retirees who no longer want to maintain a large house.

Personally, I wanted to stop paying the obscenely high rents in Athens, and now I own my house while I pay a relatively small monthly rent to the property owner. I can finally have some money in the bank, in addition to having some disposable income to spend in Athens. I can contribute to the incomes of local merchants since I can afford to go out to eat, go hear some live music and buy some items at some of the locally owned shops downtown.

I attended a Federation of Neighborhoods meeting where the Eastside was under discussion. When I suggested a tiny-house community for a location along Lexington Road, people who live on the Eastside applauded. Whenever I tell someone that I live in a tiny house, they often say that they would love to do that.

It shouldn’t be a difficult thing for the ACC government to figure out—it’s been done dozens of times across the country, including other progressive communities like Seattle, Portland, OR and Sonoma County, CA. There’s really no excuse why they can’t be successful here.