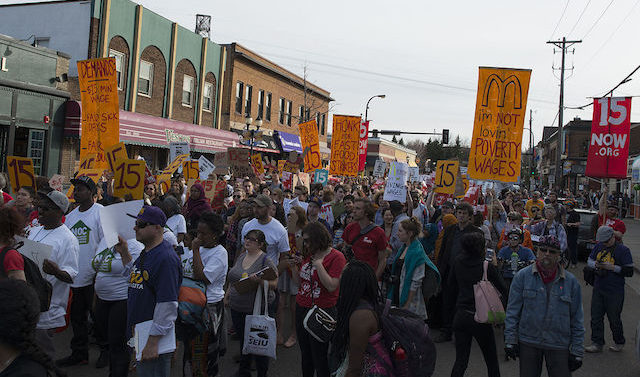 The workers’ rights movement has exploded in the last few years, with fast food, agricultural and other workers staging strikes and other nonviolent actions to demand increased wages, benefits and better working conditions. One group of workers that has received far too little attention is adjunct college professors—those who are hired on a temporary basis, as needed.

According to data collected by the Chronicle of Higher Education, adjuncts at one college and two universities near my home in Southeast Florida earn between $1,380–$3,000 to teach a 15-week, three-credit course. My own university’s published rates range from $1,500–$3,000. A national survey found the average pay for a three-credit course to be $2,700.

Given that the typical equation for calculating preparation and grading time for a three-credit course is three hours for every one hour of class time, it’s safe to assume that adjuncts put in a good 135 hours during a semester. That works out to just over $10 an hour for someone making the lowest rate and about $22 an hour for the higher rate based on the rates listed above.

This is appalling, and it puts many adjuncts in the same camp as 42 percent of workers in the U.S. who earn less than $15 an hour, according to Forbes. The American Association of University Professors has noted that of the more than 30,000 adjunct professors who would like to obtain a full-time academic position, more than 60 percent hold one or more other jobs.

These wages are not nearly ample enough to afford the basic necessities of life in the U.S. According to MIT’s Living Wage Calculator, a living wage in Miami is $11.45 per hour for a single adult. The Service Employees International Union (SEIU) estimates that in New England, an adjunct professor would have to teach 17–24 classes a year to be able to afford a home and pay for utilities. Teaching four classes per year would cover only the grocery bill for a family of four.

The work is also unstable, as classes can be canceled at the last minute if enrollment is not adequate. One adjunct even described her class being canceled the morning it was to start.

In addition to these low wages, adjuncts do not receive any kind of benefits.  Many times, they are not even allotted a space on campus to meet with students, or if they are, it might be one without a computer or phone. A report from the University of California at Berkeley found that nearly a quarter of all adjunct professors receive some form of public assistance, like food stamps or Medicaid. Many must, as grown adults, live with their families and struggle to afford basic food requirements. One adjunct professor reported, “I lived off of fried potatoes and onions for the semester. I actually lived better as a grad student than I do now.”

To make ends meet, many adjuncts become “gypsies,” traveling from one campus to another to teach as many classes as possible. I did this some time ago, at one time teaching seven classes at three different universities, just so that my family of three could afford a cheap apartment. The hours spent on the road, of course, are not calculated in the pay.

Adjunct faculty are rarely integrated into school or departmental activities. One study of 105 research universities found that faculty senates at approximately two-thirds of the sample excluded adjuncts from participation. Another study conducted by the Chronicle of Higher Education’s Adjunct Project found that more than half of the respondents had no say at all in faculty governance.

My own experience is that the adjuncts are physically separated in that, when office space is allotted, it is nowhere near the other faculty. I was never invited to nor was I welcomed to departmental activities. Indeed, most faculty members had no idea who I was.

Even worse, while often being hired sight unseen, adjunct professors can be undermined when administrators determine they need to excessively control the curriculum. At one university where I was hired based only on my curriculum vitae (no personal interaction, not even a phone interview) to teach an introductory course, I received an email three weeks into the semester detailing my syllabus, lecture notes and exams. Given that I had obviously already provided my students with a syllabus and the course was well underway, I chose to ignore this email from the department chair (whom I never met) and carry on as I had planned. Not surprisingly, there was no followup to that email and, despite ignoring these requests, I was asked to (but could not) teach again for that university.

In essence, while they are among the workhorses of higher education, adjuncts are decidedly second-class citizens. In February, the SEIU recommended that adjuncts earn $15,000 per course.  They admit this might be reaching for the sky but argue that a national conversation about adjunct wages is desperately needed. If we truly believe that education is the pathway not only to financial success but also to personal satisfaction, it is completely deplorable that we compensate a significant portion of the people who provide it so poorly. In particular, at universities that pledge to value social justice and human rights, it is an atrocity that employees who perform such a valuable service are not afforded a living wage.

Laura Finley, Ph.D., teaches in the Barry University Department of Sociology and Criminology and is syndicated by PeaceVoice.