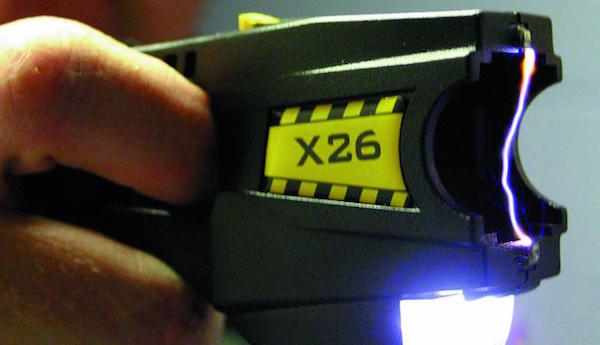 What is the latest relevant information in regard to the Athens-Clarke County Police Department’s purchase of 145 taser electroshock weapons at a cost of $200,000?

Here is a summary:

The ACCPD continues to deny the existence of the proven dangers of tasering citizens.

Notwithstanding the ACCPD’s assurances that tasers are safe and do not pose a serious threat to human life or health, a Georgian was fatally tasered by police just six days ago.  He was the second Georgian to be fatally tasered by police in less than a month, and he was the third person to be electroshocked to death by Georgia police this year. He is also the second person tasered to death by Georgia police since last April when the ACCPD, claiming that tasers are not dangerous, announced its taser plans to the public.

Unfortunately, the new ACCPD chief of police has turned out to be pro-tasering to the max. Worse still, his own words show that he is someone who does not speak the truth about the dangerousness of electroshock weapons and who does not believe in transparency when police use tasers.

The first thing to note is that the ACCPD, busily equipping its officers with tasers so they can begin electroshocking local citizens, remains in a state of denial about the dangers to human life and health posed by police officers deploying tasers.

The ACCPD clings to the myth that subjecting a human being one or multiple times to a powerful, painful, debilitating electroshock with a taser is no big deal. It stubbornly refuses to admit that fatal police taserings are continuing to occur across the nation. (The most recent was last Friday, Aug. 7, at the victim’s residence in Hartford, CT, where police lethally electroshocked 26-year old Matthew Russo, who from news accounts was experiencing some sort of mental medical emergency and allegedly “became combative with emergency medical technicians, police officers and crisis team personnel.” Shortly after the tasering, Mr. Russo “began to experience difficulty breathing;” he died later at a hospital. To those familiar with American police tasering abuses, Russo’s tragic story—the electrical jolting to death of a citizen suffering mental problems and in need of help—is all too common.)

With respect to nonfatal police taserings, the ACCPD, again in the defiance of the facts, continues to refuse to admit that many citizens not killed by the electroshocking nonetheless end up being paralyzed or suffering permanent or lingering painful injuries.

In short, it would appear that there are no limits on the willingness of the ACCPD to hoodwink the public about the totalitarian implications of conferring on an already heavily armed and well-equipped police force the additional power to electrically shock citizens with a creepshow weapon that is a hallmark of perverted science.

The first fatal Georgia police tasering of 2015 was on Jan. 1, when college student Matthew Ajibade, 22, was electroshocked while confined to a restraint chair in a Savannah jail. I mentioned this tragedy in a May 14 Flagpole article. The second fatal tasering by Georgia police this year occurred on July 11 when George Mann, 53, was fatally tasered during an encounter with five Gwinnett county police officers. I mentioned this tragedy in a July 22 Flagpole article.

The third fatal police tasering of a Georgian this year occurred less than a week ago, on Thursday, Aug. 6. The victim, Troy Lee Robinson, 33, was the passenger in a car stopped at a DeKalb county police roadblock for a tag violation. When the driver was ordered to exit the vehicle, Robinson opened the passenger door and fled on foot. There were no outstanding warrants against him. He had not committed or threatened to commit a crime of violence or any other crime (except possibly defying a police order to halt).

Nevertheless, there was a foot chase in which Mr. Robinson was pursued by a policeman who with a taser fired a barbed electrode into Robinson’s back while Robinson was attempting to climb an eight-foot wall. The electroshocking caused Robinson to fall off the wall, resulting in lethal injuries to his head and neck. The unconscious Robinson was transported by ambulance to a hospital, where he soon died. (While in the ambulance Robinson’s hands were handcuffed behind his back, allegedly due to “police protocol.” There does not appear to be a protocol prohibiting police from tasering citizens who might fall from a height and seriously hurt themselves.)

Robinson was not the first victim to die or suffer major injuries resulting from a fall which occurred because the victim had been tasered by police while he was positioned in a high place and when it should have been obvious to police that if tasered the victim might tumble to the ground below.

Robinson’s tragic and unnecessary death is but one more of the countless sickening examples of abusive use of tasers by American police. It also is a warning of what may happen here in Athens-Clarke county once the ACCPD begins electroshocking people.

It might be worthwhile to briefly discuss the legal aspects of Mr. Robinson’s horrible death at the hands of police.

More than 30 years ago the U.S. Supreme Court imposed strict constitutional limits on police use of force to prevent a criminal suspect from fleeing or escaping arrest. Deadly force may not be used unless (1) it is necessary to prevent the flight and (2) the officer has probable cause to believe that the suspect poses a significant threat of death or serious physical injury to the officer or others. The Bill of Rights therefore forbids police officers from using deadly force against apparently unarmed, nondangerous fleeing suspects.

Whether the death of the fleeing Robinson, who appeared neither armed nor dangerous and who had committed no crime (except possibly the nonviolent misdemeanor of disobeying a police order to stop), violated his federal constitutional rights depends, therefore, on whether police used deadly force against him.

Lethal weapons involve the use of deadly force; nonlethal weapons do not. Tasers used to be categorized as nonlethal. Nowadays, however, probably because of the large number of fatal police tasering incidents, both police agencies as well as Taser International (the corporation that markets tasers) have reclassified tasers as “less lethal” rather than nonlethal. A less lethal weapon is not a nonlethal weapon but a type of lethal weapon. Thus, when they tasered him, police were using deadly force against Robinson under circumstances where deadly force is not permitted. DeKalb police violated Robinson’s constitutional rights when they killed him with a taser, a deadly weapon.

(In its pro-tasering crusade the ACCPD is logically inconsistent of the issue of whether tasers are deadly weapons. On the one hand, it tells us tasers are not dangerous and that most tasered persons fully recover within minutes. On the other hand, like Taser International, it describes tasers as “less lethal,” which means they are a type of lethal weapon.)

In interviews with the press, especially one with Flagpole published last week under the title “Tanks and Tasers,” Scott Freeman, the new chief of the Athens-Clarke County Police Department, presents himself as an honest cop who believes that local policing should be transparent.

When it comes to police use of taser electroshock weapons on the local citizenry, however, Freeman is not to be trusted and opposes transparency.

It is also clear that Freeman refuses to promulgate, and make available to the public, rules regulating police use of tasers and that he refuses to guarantee that there will be videos of police taserings or that any such videos will be available to the public or seen by anyone but the police themselves. He even refuses to promise that the department will inform the public each time a citizen is tasered by police. With respect to tasering of citizens, Freeman thinks that police secrecy trumps public transparency.

Appallingly, chief of police Freeman even refuses to promise that his officers will not taser such vulnerable groups as pregnant women, the elderly, children or people with heart conditions; or that police will not taser citizens multiple times; or that tasers will not be used as a pain compliance technique to force citizens to obey police commands, particularly where no violence has occurred or been threatened or when the citizen is passive.

Chief Freeman’s statements to Flagpole involve the same denials of fact and the same misrepresentations about the realities of American police tasering practices that we have been hearing from the ACCPD for months. His statements, like those of the other ACCPD personnel who praise tasers, could easily be mistaken for Taser International talking points.

The chief falsely claims that police utilize tasers to de-escalate situations, and declines to recognize that police use of tasers is a type of police violence. He falsely claims that police use of tasers reduces injuries to suspects. He plays down the lethality of tasers, blithely asserting that “there’s no 100 percent guarantee” that these “less-lethal weapon[s]” will not kill. The chief ridiculously compares tasering with pepper-spraying, as if American police had fatally pepper-sprayed 700 citizens in recent years. He callously blames fatal police taserings on the tasering victims themselves: They shouldn’t have had “some type of heart condition,” or they shouldn’t have “use[d]… drugs,” or they shouldn’t have had “some type of health anomaly.”

Perhaps the most galling of chief Freeman’s statements is this: “Tasers are not going to be used on passive persons.” His statement is a huge twisting of the truth. One of the most widespread abuses committed by American police with tasers is their practice of utilizing tasers as pain compliance devices. That is, they taser citizens, or threaten to taser them, for the sole purpose of coercing compliance with a police command, even when no violence has occurred or been threatened. It is a common police practice throughout this country, for example, to threaten to electroshock a driver stopped for a traffic offense if the driver refuses a police order to exit the vehicle. There are plenty of videos on YouTube confirming the existence of this reprehensible police practice. The video of poor Sandra Bland’s recent traffic stop in Texas for improper lane change depicts the armed, aggressive, arresting officer aiming his taser at Ms. Bland, who is simply sitting in her car, and loudly ordering her to get out of the car lest she be electroshocked (“I’m going to light you up!” are his actual words).

Chief of Police Scott Freeman is not an ignoramus or a moron. He is an educated, articulate man. He is an experienced police officer. It is inconceivable that he would be unaware of the actualities of police abuse of tasers. It is dreadful that Freeman, in an effort to defend his Department’s decision to purchase tasers, would publicly make assertions about police taser use that he surely knows are either downright false or essentially misleading. Chief Freeman should be ashamed of himself and needs to apologize.

Returning the Tasers and Getting a Refund

The ACCPD seems suspiciously overenthusiastic about the prospect of being given power to administer electrical shocks on citizens, and has stooped to wage a propaganda war of deception and misrepresentation in behalf of making tasering a routine law enforcement practice here. On the issue of police tasering practices, the new chief of police has revealed himself to be a cunning pro-tasering dissembler, presumably because he too can’t wait to get his hands on a taser. There is thus reason to believe that once they begin using tasers ACCPD officers will, as their fellow officers in Chatham, DeKalb, and Gwinnett counties did this year, find themselves electroshocking citizens to death.

I ask once again—before they kill or grievously injure someone with one of their expensive electroshock contraptions—that our local police return the tasers and get the refund.

Donald E. Wilkes, Jr. is a Professor of Law Emeritus at the UGA School of Law.