Auburn’s Sordid Past Shows the Hypocrisy of the NCAA 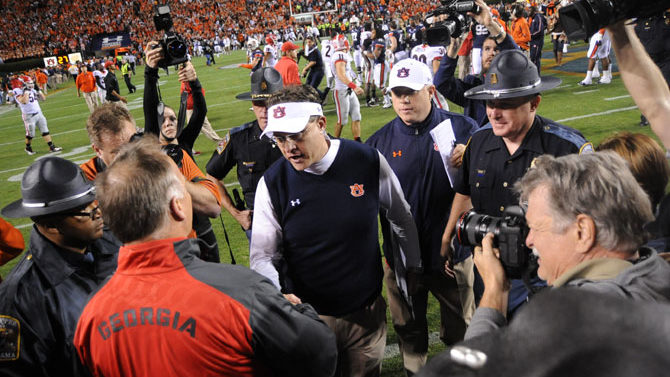 We all remember the play. In the waning seconds of last year’s game, Auburn quarterback Nick Marshall threw up a desperation pass. Georgia safety Josh Harvey-Clemons went up for the pick. The ball bounced off his hands and into the waiting arms of a Tigers receiver, who strolled into the end zone for the win.

It was a heartbreaking football play for Bulldogs fans, but it was more than that: It was an emblem of everything that’s right and wrong with these two programs. One is too clean for its own good, and the other is as crooked as Laquon Treadwell’s ankle.

Marshall, famously, was a UGA recruit whom Coach Mark Richt wanted to convert to a cornerback (which calls into question his football aptitude, if not his integrity). He was dismissed for stealing from a teammate, then joined Gus Malzahn’s high-octane spread offense and went on to play for a national championship.

He didn’t stay out of trouble off the field, though. In July, police cited him for possession of marijuana. His punishment? A $1,000 fine—and a half-game suspension against lowly Arkansas. They didn’t need Marshall, winning 45–21 with backup Jeremy Johnson throwing for 243 yards and two touchdowns.

Last year, Harvey-Clemons violated the Georgia team’s drug policy. He wasn’t arrested and had no prior record at the time, but Richt suspended him for a full game against Clemson—a game UGA would go on to lose, putting a serious dent in its national title hopes.

After the season, Harvey-Clemons would be hit with a four-game suspension for a violation of team rules. Tray Matthews was caught double-cashing stipend checks and then dismissed for a “classroom disturbance.” Matthews ended up transfering to—you guessed it—Auburn. Harvey-Clemons transferred to Louisville to rejoin former Georgia defensive coordinator Todd Grantham.

Bobby Petrino, incidentally, is on his second stint as the Cardinals’ head coach. Louisville hired him away from Auburn, where he was Tommy Tuberville’s offensive coordinator, in 2003. That same year, as the Tigers were preparing to play archival Alabama in the midst of a mediocre season, influential booster Bobby Lowder secretly flew the university president to Louisville to meet with Petrino about taking Tuberville’s job. (The Riverboat Gambler himself, of course, had fled Ole Miss under the cover of night, while Petrino would go on to leave Louisville, the Atlanta Falcons, Arkansas and Western Kentucky in the lurch en route back to the Bluegrass State.)

But let’s back up even further. Tuberville got the job after Lowder forced out Terry Bowden in spite of a 47–17–1 career record and a perfect season in 1993. (Georgia ended his 20-game winning streak the next year.) The only reason the Tigers didn’t win the national championship was because the NCAA put them on probation. They were on probation because “60 Minutes” caught the program, under legendary head coach and athletic director Pat Dye, paying player Eric Ramsey.

Then, there was the controversy surrounding 2010 Heisman Trophy winner Cam Newton. Although no proof ever surfaced that Auburn paid Newton, his father admitted to asking Mississippi State for up to $200,000 to steer his son there. The NCAA let Newton off because it decided his dad wasn’t technically an agent. However, reporter Selena Roberts published allegations that Auburn did pay at least two players and changed grades to keep them eligible during its 2010 BCS title run. Then-head coach Gene Chizik was fired in 2012—not because of the scandals, but because of his 3–9 record that year.

Although he was part of Chizik’s regime, the same clouds haven’t gathered over Malzahn, who seems to be running a (relatively) clean program. But it’s clear that Auburn wouldn’t have been in the national title hunt for the third time in the past five years if his predecessors hadn’t cheated or allowed others to cheat. Success begets success. Maybe Auburn’s program finally is good enough that Malzahn doesn’t feel compelled to open up his wallet to compete with the Tide.

Meanwhile, here in Athens, Todd Gurley is returning from a four-game suspension for signing $3,000 worth of autographs. If he had gone to Auburn, he may have gotten off a lot lighter. If a less morally upright man were coaching Georgia, he might be vying with teammate Marshall for the Heisman (although neither could have saved the Dawgs against Florida, unless they played linebacker).

Now, let’s not make Richt out to be a saint. While Gurley’s future earnings were in jeopardy, Richt has been raking in a $3 million salary—not counting his earnings as a pickup-truck pitchman—and living in a big house in Oconee County, safely ensconced away from all the people from disadvantaged backgrounds like Gurley’s who weren’t blessed with NFL athletic ability and are struggling to make ends meet as a result.

But Richt does have a deserved national reputation for taking a chance on troubled kids, mentoring them and showing them some tough love if they don’t grow up. Which is a double-edged sword—when Georgia fans aren’t whining about all the “thugs” Richt recruits, they’re mad that he kicked so many off the team.

It’s not that Richt is wrong, but the standards should be the same for every program. The NCAA is a cesspool of hypocrisy, and until everyone’s on the same, well, the same playing field, Georgia may never win the big one.

Editor’s note: In case you were wondering, I’m an Ole Miss graduate raised by Yankees in Birmingham, AL, and no, I have no allegiance to either Auburn or Alabama. All of y’all are crazy.