Jody Hice, Your Next Congressman, Wants to Overthrow the Government 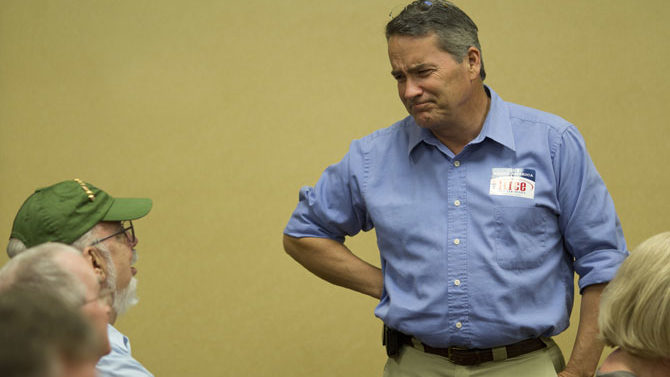 Meet your next congressman, the Rev. Jody Hice, whose victory in the July 22 Republican 10th District runoff pits him against Athens Democrat Ken Dious, whom Hice will likely defeat by 30 points in November.

But before the good reverend’s January ascent to Congress, we might expect to find him in Texas with an assault rifle trained on Guatemalan 8-year-olds, whom Hice referred to as “invaders” in an interview shortly before his victory.

Like his predecessor, current congressman Paul Broun, Hice treats the Second Amendment as tantamount to scripture; but unlike Broun, an avid hunter and defender of hunters’ rights, Hice’s gun nuttery is born out of paranoiac visions of a looming insurrection against the tyrannical government… and, one assumes, those supporters of the current tyrant (read: Democrats).

But first things first: This “invasion” of refugee children needs to be repelled. In the July 16 interview with the website Liberty Conservatives, Hice was asked about the current child refugee crisis—mostly children arriving parentless in U.S. border states—and how “we need to be able to defend ourselves, and defend ourselves however we choose to do so.”

Hice responds: “Absolutely, that is the reason we have the Second Amendment. Ultimately, it’s not about hunting and fishing and that type of thing. It is about our ability as individuals to defend ourselves.”

Against children. Against unaccompanied children as young as 3 years old. That is the immigration issue under discussion in the interview, the more than 50,000 Central American children escaping the nightmare violence of their homes. A recent Pew study finds that the explosive growth in the immigration of unaccompanied children is due to a 117 percent increase among children between 6–12 years of age. This is the crisis, and try as one might to imagine a different interpretation, it seems clear that Hice is urging Americans to train their AR-15s on refugee children as though they are invaders.

Hice is a Christian preacher, let’s remember. Far be it from my agnostic self to question the good Reverend’s theology, but I just did a quick scan of the Gospels, and I couldn’t find the part where Jesus advocates facing off with elementary school-age children with assault rifles. I do remember from my church-going days that “Jesus loves the little children” song about “all the children of the world” who are “precious in his sight.” Aha, of course! I misunderstood the lyrics: they are precious in his sights. Jesus is the Prince of Piece, not Peace. I’m already learning so much from Pastor Hice.

Here’s what I also learned: Conspiracy theories are to be acted on in the most violent way imaginable. Scientific theories of evolution and climate change should be dismissed out of hand, but whatever comes out of your weird uncle’s paranoiac mind should be considered as irrefutable fact.

The children are agents of the Mexican drug cartels, suggests Hice. “Many of these kids are coming across with the direct help of the drug cartels. We are opening our country up to who knows what right now.”

Who knows what?! Sure, little Gabriela and Juan look like desperate and hungry third graders who have left their families to find safety, but it’s also totally reasonable to assume that any brown person, whatever their age, might be a narcoterrorist. Hice isn’t saying that the cartel members themselves are entering the country but that children are somehow being transformed into little pint-sized Scarfaces on their trip up. Thus our need to meet them with paramilitary vigilantism.

To be fair, Hice briefly shoehorns in some pansy-ass compassion: “We need to provide generous kindness to them while they’re here.” But the children have to get here first, and slipping past a phalanx of armed goons is quite an obstacle to whatever “generous kindness” exists on the other side.