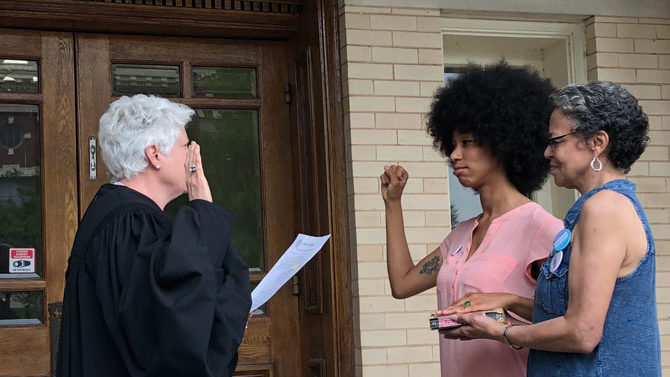 The Athens-Clarke County Commission passed a resolution Thursday asking the county Board of Election to hold a special election in March to replace Commissioner Mariah Parker.

“We know we’ve had a significant redistricting this year, so we find ourselves in greater legal clarity when we move into the new year, and we’re in an environment when the new maps are in effect,” Mayor Kelly Girtz said at a called meeting Sept. 15.

The issue is clouded by the drastic changes Republican state legislators made to the ACC Commission earlier this year, essentially swapping most of districts 2 and 3. If the election is held under the new lines, East Athens residents in District 2 would have no representation until January, when newly elected District 3 representative Tiffany Taylor takes office. But if it’s held under the current lines, most of Commissioner Melissa Link’s constituents in Cobbham, Boulevard, Normaltown and the Hancock Corridor would have no representation for the remaining two years of Parker’s term, while much of the current District 2 would have two commissioners. In addition, whoever won the special election would likely be ineligible to run in 2024.

“Either way you go, you could have a lawsuit if you have the election in November,” Commissioner Mike Hamby said. He—like Girtz and several other commissioners—pledged to provide constituent services for District 2 residents until the seat is filled.

Holding the election on Mar. 21—the next available date under state law—will also give candidates more time to prepare and voters more time to consider their options. For a November election, candidates would have just 10 days to decide whether to run and less than three weeks to campaign before early voting starts.

“I want to ensure that anybody who’s going to step forward as a candidate for District 2 has the opportunity to prepare for that, and similarly that constituents are able to prepare to make a wise determination,” Girtz said.

Poll workers need time to prepare, too. If held in November, the special election would have to be entirely separate from the general, according to state law—different voting machines, different ballots and different poll workers. That presents challenges, Director of Elections and Voter Registration Charlotte Sosebee told the Board of Elections last week. For example, ACC would have to borrow voting machines from the state. The county’s voter database has already been switched over to the new districts for the May elections, so it will be hard to locate voters who live in the old District 2. And 2,000 absentee ballots have already been printed.

The resolution passed unanimously, although Commissioner Ovita Thornton, who was out of town, was opposed to it, according to Hamby. But the BOE does not have to follow the commission’s wishes. “The Board of Elections has the discretion to call the date they’d like,” county Attorney Judd Drake said. A called meeting is scheduled for Tuesday, Sept. 20.

Meanwhile, Link—who has already announced that she’ll run for the District 2 seat if the election is held using the new lines—addressed rumors that Parker had planned their resignation so that Link could take over the seat. Link said the first she heard of Parker’s resignation was from Commissioner Patrick Davenport that morning. Other commissioners have also said they were blindsided by the announcement.

“For anyone out there who’s creating these conspiracy theories about collusion, it doesn’t exist. I knew nothing about this,” Link said.