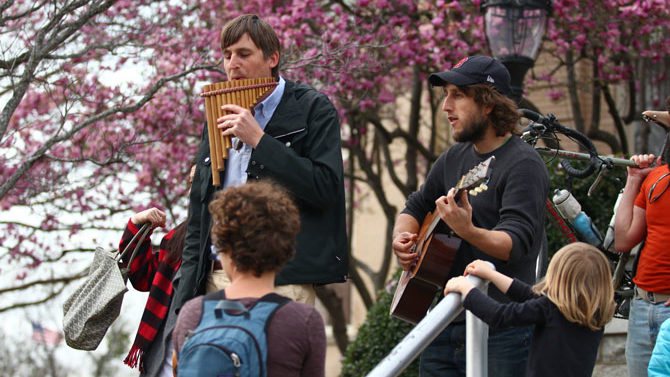 Turns out, Republicans may have gotten a little too cute with their redistricting spree. They drew Russell Edwards and two other Athens-Clarke County commissioners out of their districts. Then they did the same to Patty Durand, a green-energy executive from Gwinnett County who was planning to run against Republican Tim Echols for Public Service Commission.

Edwards was looking for something to run for, and along came an opportunity. He got his start in politics running against then-congressman Paul Broun in 2010. Now he’s running against Broun’s former campaign manager. “One door closes and another opens,” Edwards said.

The PSC, by the way, regulates Georgia Power and other utilities. With his electric car and rooftop solar panels, the former Winterville resident Echols is a progressive on some issues despite the R by his name, but he’s also consistently voted in favor of rate hikes for Plant Vogtle, which Edwards can exploit.

Complicating matters further, Durand still qualified and apparently intends to mount a legal challenge to keep her name on the ballot. Then, in November, another Athens resident, Colin McKinney, is running as a Libertarian. He didn’t qualify last week because Libertarians don’t have primaries; they choose their candidates at a convention.

The saga of Edwards and this down-ballot statewide race few people generally pay attention to is emblematic of what has been the most chaotic and confusing runup to an election since the Wild West days of city-county unification in 1990—districts in disarray, candidates who don’t know if or where they can run, voters who don’t know if they can vote or for whom.

Mayor Kelly Girtz would seem to be a strong favorite for re-election four years after beating two other candidates with 60% of the vote, winning every precinct in the county. But opponents must sense weakness, since five people had signed up to run against him when the week-long qualifying period ended Friday, Mar. 11. At first glance, the strongest appears to be Mara Zuniga, the former Athens GOP treasurer who also has the backing of Athens Classic and Athens Clean and Safe, groups that are using a perceived crime wave and homelessness crisis to raise money from affluent UGA alumni and parents in Atlanta. While Republicans make up less than 30% of the Athens electorate, five challengers could chip off enough of Girtz’s support to send the race to a runoff. And in a low-turnout runoff, anything can happen (just ask Broun, who pulled off a legendary upset in 2007).

Four of five commission races will be contested, with multiple candidates for all three open seats. Commissioner Ovita Thornton was the only incumbent to escape unscathed.

Local school board races often only offer voters one choice, but this year three open seats each drew two candidates, although incumbents LaKeisha Gantt and Linda Davis are unopposed. One of those seats could be filled by Commissioner Tim Denson, who was prohibited from running for re-election when Republican legislators drew him out of his district. Like Edwards, he found a landing spot, qualifying to run for school board in District 5. The third ousted commissioner, Melissa Link, will sit out 2022.

One race that won’t be contested is solicitor general, the county official who prosecutes misdemeanors. Incumbent C.R. Chisholm did not qualify to run for a fifth term. Taking his place will be Will Fleenor, the chief assistant solicitor.

On the other end of the spectrum, more than a dozen candidates signed up to run in the 10th Congressional District, where Rep. Jody Hice (R-Greensboro) is running for Georgia secretary of state. On the Republican side, the frontrunner is trucking company owner Mike Collins, the runner-up to Hice in the 2014 GOP primary. Other candidates include the aforementioned Broun and Vernon Jones, the former DeKalb County CEO and state representative who switched parties, briefly primaried Gov. Brian Kemp and has been endorsed by Donald Trump.

Given that it’s an open seat and the district is more than 60% Republican, it’s no surprise conservative candidates are lining up to fight over who’s Trumpiest. More surprising is that five Democrats entered the race as well. They include Sandersville nurse and 2018/2020 nominee Tabitha Johnson-Green, Hull Mayor Paul Walton and Athens real-estate agent and musician Jessica Fore.

Here’s the final list of candidates for local office. Asterisks indicate incumbents, and if no party affiliation is given, it’s a nonpartisan race.

The Defense of Democracy Starts at Home