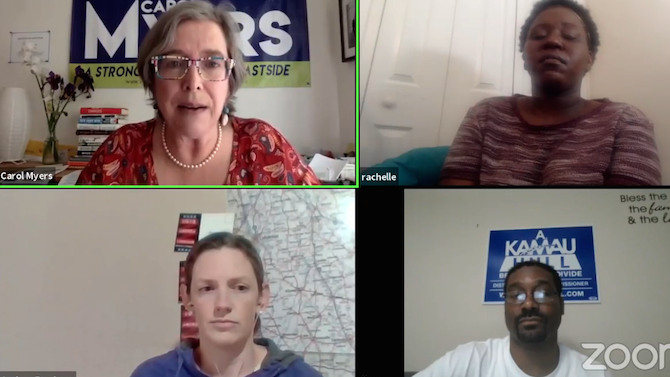 An exchange on environmental issues during an Athens for Everyone online debate highlighted some of the differences among the three candidates to represent Commission District 8 on the Eastside—retired educator Carol Myers, couples therapist Andrea Farnham and lawyer Kamau Hull.

“This is my issue,” Myers said. “This is one of the reasons I’m running for commissioner.” Myers said she was among those who pushed to create an office of sustainability in the county government, pass a resolution committing to 100 percent renewable energy and put $16 million for that cause in SPLOST 2020.

“To be very frank, when white people talk about renewable energy and saving the environment and all that stuff, it makes me want to strangle somebody,” Farnham said. “It lacks a racial justice element to it.” She said she supports a Green New Deal, but environmental policy has to be paired with labor policies to redistribute wealth. If not, it’s “super racist” and “cleans up Athens for white people to enjoy while leaving poor and minority communities behind.”

Hull called the renewable energy commitment “a great move.” But there is no accountability to ensure the money will circulate within the community, he said. New development should include green benefits as well as community programs. “If we do that [convert to 100 percent renewable energy] and we still have the same racial and poverty issues, we haven’t really accomplished much,” he said.

Green energy is a social justice issue, Myers said. Lower income residents have a larger energy burden—they pay a bigger share of their income on utilities—and green energy will create jobs prioritizing marginalized communities, she said. “If I’m commissioner, you can call on me to make sure this is getting done,” she said.

Accountability measures should have been put into place before the resolution was passed, Hull responded.

The candidates also discussed white privilege, affordable housing, unions, reparations and other issues. View the full debate at Athens for Everyone’s Facebook page. Debates for District 4 and District 6 are also available, and a debate between District 10 incumbent Mike Hamby and challenger Knowa Johnson will stream at 5:30 p.m. Wednesday, Apr. 22.

Editor’s Note: The District 10 debate has been postponed. We will post the new date when it’s been rescheduled.