Stuck Inside of Your House With the COVID Blues Again 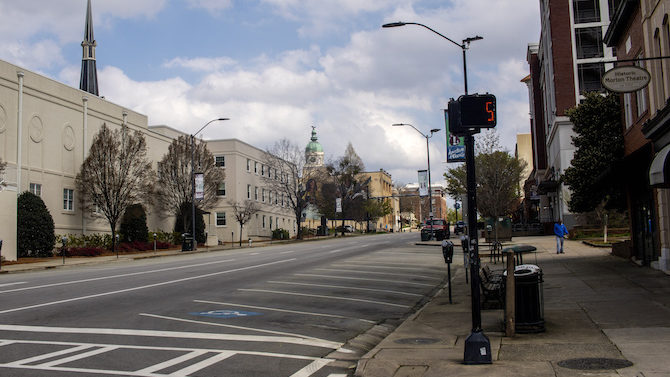 Mayor Kelly Girtz said he wants to extend the current state of emergency for another month, keeping many businesses shuttered and requiring people to stay at home unless on essential business into May and possibly June.

“We think that, realistically, based on what epidemiologists and other similar scientists are saying, we’re looking at at least a June time frame before we get back to anything resembling normalcy,” Girtz said at a commission work session Mar. 31.

One recent study projects that COVID-19 deaths in Georgia will peak around Apr. 23. But lifting social distancing measures too early could result in another spike of cases.

In an effort to slow the spread of coronavirus, the commission passed an emergency measure Mar. 19 closing bars, gyms, movie theaters and other non-essential businesses where people gather. The ordinance also prohibits people from leaving their homes except to buy food or other supplies, seek medical care, go to work or for outdoor recreation or exercise. Both expired Apr. 7, but Girtz said he would ask the commission to extend them at a voting meeting that night.

Meanwhile, after weeks of outcry from Democrats and local elected officials of all stripes, Gov. Brian Kemp finally issued a statewide shelter-in-place mandate Apr. 2, lasting until Apr. 13. That order might require some tweaking of the Athens-Clarke County ordinance to resolve any discrepancies—state law supersedes local, as Tybee Island found out last week when it was forced to reopen its beaches. Kemp also announced that he will keep public K-12 schools in Georgia closed for the rest of the 2019–2020 school year.

Commissioner Tim Denson floated the idea of using empty UGA dorms to house the homeless, but that would require going through the Georgia Emergency Management Agency. Other potential measures would require approval from Atlanta, too.

There’s a limit to what local governments can do to help people directly, according to Williams and ACC Attorney Judd Drake. The “gratuities clause” in the Georgia constitution prevents ACC from simply giving money to individuals or businesses. “We do think there are some things we can do successfully, but perhaps not as broadly as originally envisioned by the mayor and commission,” Drake said.

Several commissioners brought up the idea of cutting property taxes or suspending sales taxes. But suspending SPLOST or TSPLOST would be illegal without another referendum, and there’s no way to force landlords to pass the savings on to tenants if the millage rate is slashed. The county could also be facing a fiscal crisis of its own.

Even with the economic downturn, ACC is in good shape with a projected budget surplus of $3.4 million this year and nearly $30 million in reserves. Williams prepared the broad outlines of two 2021 budgets: one that assumes everything will be back to normal when the fiscal year starts July 1—already off the table, since UGA has announced that Maymester and summer classes will be held online—and another in case UGA remains closed through the fall. In the latter scenario, revenue plummets and the county runs an $18 million deficit.

“We’ve never had a time like this, with the university wholesale closed down,” Williams said. “We’re not recommending cutting back, but it would be on the table if this goes on.”

On the bright side, the coronavirus crisis has commissioners thinking creatively about the budget. “Although we’re going through an extremely tough time, when we come out the other end, maybe this gives us an opportunity to rethink the way we do things,” Commissioner Andy Herod said.

Williams and Emergency Manager J.W. Thaxton also briefed commissioners on federal relief measures. The Small Business Administration is offering loans to small businesses to cover payroll, rent or mortgage payments and utilities. Those loans will be forgiven if employers keep staff on payroll for eight weeks.

Most individuals will receive a check for $1,200—$2,400 for married couples—and $500 per child, although undocumented immigrants are not eligible. Those who make more than $75,000 a year will see smaller checks; individuals who make $99,000 or above will not receive a check, nor will joint filers who make double that amount. But will those benefits be enough? “$1,200 is nothing if you don’t have a job at all,” Commissioner Melissa Link said. “It’ll barely get you by.

Unemployment benefits have been extended and expanded, and tipped workers, freelancers and entrepreneurs are now eligible. The recently passed CARES Act adds $600 a week to unemployment benefits on top of whatever applicants are eligible to receive from the state.

Student loan payments have been suspended, and homeowners with federally backed mortgages can apply for a 180-day forbearance if they’ve experienced hardships due to coronavirus.

Denson and Commissioner Mariah Parker introduced a resolution urging landlords and banks to work with renters and homeowners who are having difficulty making payments. It also calls on Gov. Brian Kemp, President Trump and Congress to impose a moratorium on rent and mortgage payments during the coronavirus crisis. The resolution—which does not carry the force of law—passed unanimously. ACC Magistrate Court has already suspended hearings on evictions.

But some commissioners objected to the lack of notice Parker and Denson gave their colleagues before introducing the resolution—and its lack of teeth. Commissioner Ovita Thornton called it “wishful thinking” that “looks good on paper but doesn’t help nobody.”