Residents Give Input on Bethel Redevelopment 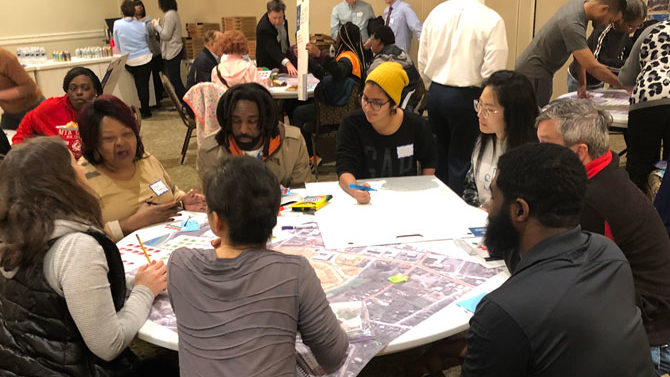 Along with the Classic Center’s new arena, the North Athens Project has the potential to transform the downtown area. But residents of Bethel Midtown Village have more pressing concerns—things like leaking ceilings, pest control and lack of services at the low-income community.

The planning process kicked off last week for the massive redevelopment project centered along College Avenue north of Dougherty Street. Funded by a mix of $44 million from SPLOST 2020, federal tax credits and private investment, the project will turn the dilapidated 190-unit subsidized apartment complex into a mixed-use, mixed-income development with approximately 200 market rate units, 200 below market rate units and 200 public housing units. It could also include existing low-density public housing north of Bethel, as well as other government-owned property nearby, such as the Athens-Clarke County Planning Department building and a city parking lot.

About 75 people, most of whom said they live or work in the study area, attended the kickoff session. They took surveys and broke out into groups to brainstorm ideas for what they want to see in the area. “How does the community become what you want it to be?” architect Brian Keith asked.

Involving residents from the beginning is a far cry from the urban renewal projects of the 1960s, when the government unilaterally razed black neighborhoods like Linnentown, where UGA’s Baxter Street dorms now stand, and The Bottom, which was destroyed to make way for Bethel. Still, some anxiety remains among residents. Will moving expenses be covered? Will they be able to come back to the new development? Will their rents stay the same? (Yes to all three, Parker has assured them.)

Crime and safety, especially the dangers of crossing College Avenue, dominated residents’ concerns. They said they want various types of housing so that young people, families and seniors across a range of incomes can live side by side. Other requests included amenities like washer and dryer hookups, a grocery store within walking distance, bus shelters, a playground, a basketball court, a computer lab and picnic areas, and services like GED classes, job training and child care.

More visioning sessions will be held as the project moves on. The redevelopment partners have set up a website at NDAthensplanning.com and a Facebook page at NDAthensPlanning to keep people updated on progress.