BOE Considers New Rules to Bring Civility Back to Meetings 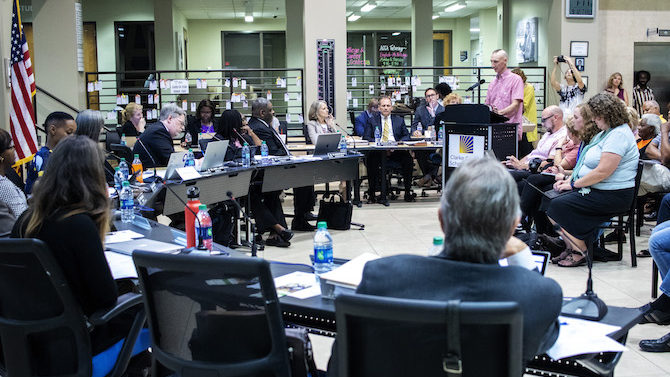 The Clarke County Board of Education’s policy committee wants to take steps to bring order back to school board meetings that have often devolved into raucous gatherings.

Over the past year or so, people in the audience have shouted at board members, speakers have made rude and sometimes threatening comments, and attendees have talked while the board was trying to proceed through the agenda. At a meeting Feb. 21, committee member Tawana Mattox wondered if there were some way to prevent audience members from yelling or screaming and to stop people from “saying someone is a Nazi or someone should die.” At one meeting last year, Mattox asked police to come to the front of the room because she felt threatened by audience members.

The committee agreed with changes to bring back civility to the meetings. CCSD attorney Michael Pruitt cautioned members that they can specify the time, place and manner of speech, “but you can’t regulate content. If someone threatens someone, that’s a different matter.”

The proposed rules say: If, after a warning from the board president, a speaker continues talking after three minutes have elapsed or makes personal attacks on school board members, that speaker will be prohibited from speaking at board meetings for three months. If there’s a second violation within a year of the first, the person will be prohibited from speaking for six months. The board president may request that audience members who disrupt the board’s work or disturb others leave the meeting.

“Typically, you have rules people follow,” said Pruitt. “The police chief chasing a woman across the room for the microphone isn’t typical.”

The policy committee also discussed the purchasing policy currently in effect that allows the superintendent or their designee to sign contracts for products and services whose cost is within a range of $10,000–$80,000. Anything costing more than $80,000 requires board approval. According to policy, the board is to receive a monthly report on purchases larger than $10,000 but smaller than $80,000. Chairman Greg Davis said he learned about some purchases from a Flagpole story, not from the district’s purchasing agent or the superintendent.

Pruitt and Chief of Policy and School Support Services Dawn Myers said school officials can make purchases under $3,500. Those from $3,501–$10,000 require two quotes. Anything greater than $10,000 requires either a request for proposal or an invitation to bid. The latter is used when a specific item is needed, such as an air conditioner part. An RFP is issued when school officials don’t have a clear picture of what they want and want to learn what a company has to offer.

Mattox said she wants a monthly report for expenditures from $10,000–$80,000, while Davis wants to lower the $80,000 threshold. The discussion was tabled because committee members want input from interim superintendent Xernona Thomas and other district employees before making changes.

In addition, Davis expressed his concern at learning recently that 62 Latinx families with children in the school system have had one or both parents picked up by immigration officials. He said he is worried about the trauma the children are enduring with their loved ones in custody.