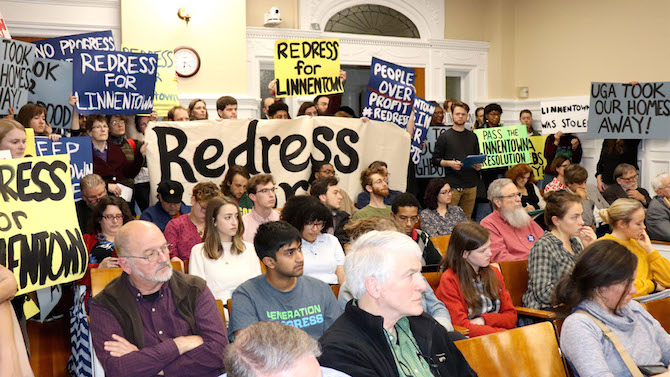 Dozens of protesters filled City Hall last week to demand that commissioners pass a resolution in support of reparations for black Athenians who were removed from their homes in the early 1960s. Former residents of the displaced community, known as Linnentown, are asking for recognition of their plight from the local government and the University of Georgia. At the commission meeting on Feb. 4, emotions ran high among commissioners and protesters alike as community members showed up in force to express their discontent that the commission has not yet formally considered the Linnentown resolution.

Last year, Joseph Carter, a member of the steering committee for the United Campus Workers of Georgia, came across a mention of Linnentown in the UGA Special Collections Library. He then sought out former residents like Hattie Whitehead, Geneva Johnson and Bobby Crook, who lived in Linnentown as children and still reside in Athens. Once brought together by Carter, they began to demand recognition that their former homes were, in the words of their resolution, “forcibly seized” by “an act of institutionalized white supremacy and terrorism.”

During the urban renewal period of the 1950s and ’60s, inner-city areas across the country were razed to make way for new development with financial support from the federal government. In Athens, Linnentown was one of several areas considered blighted that were affected by this policy. The University System of Georgia obtained a contract to demolish the neighborhood off Baxter Street and build three high-rise dorms in its place: Russell, Brumby and Creswell halls. The city of Athens assisted in the destruction of Linnentown by obtaining the land through eminent domain and selling it to the university. The exchange was made at far below market value and against the wishes of those living there, according to protesters.

Commissioner Mariah Parker helped draft the resolution, and the mayor’s office, together with Historic Athens, has provided grant funding to help research and document the lost community. Several commissioners met with Linnentown residents to discuss the resolution in detail, and some attended a rally held by the group at City Hall on MLK Day. Commissioner Russell Edwards, who attended the rally, was booed and heckled by protesters after saying he disagreed with parts of the resolution. At the meeting on Feb. 4, Edwards said he supports the resolution’s intent and was “committed to getting something passed” despite his “minor” disagreements. Commissioner Jerry NeSmith was echoing these sentiments before also being interrupted by the crowd; he ended up in a brief public dispute that was cut short by Mayor Kelly Girtz.

Parker chastised her colleagues, saying that white men who “talk of compromise” are in fact embodying white supremacy. She concluded her fiery speech by confirming her determination to stick to the exact wording of the resolution, forsaking any compromise. Commissioner Ovita Thornton, who is also supportive of the resolution, was more conciliatory and at one point even came out from behind the rail to soothe a former resident of Linnentown with a hug.

As the meeting drew to a close, Girtz promised “significant conversations” regarding Linnentown in the future. Yet it seems unlikely that the resolution will pass without changes, including the clause condemning the “white supremacy and terrorism” of UGA and the city of Athens.

Also at this meeting, commissioners delayed a decision on a 53-page agreement between the local government and the Classic Center Authority for up to one month. They will use the extra time to further negotiate how environmental sustainability, living wages and affordable housing components could be better integrated into the proposed developments, which include an arena, hotel and a senior living center.