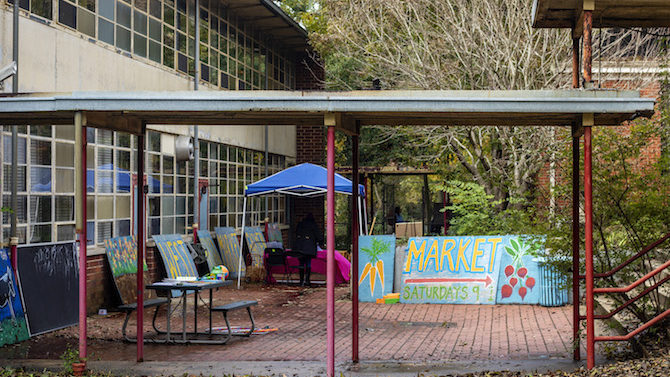 Four months after a controversial vote to do away with a community garden and farmers market at the old West Broad School, CCSD officials, architects and residents are starting to delve into the details about what to do with the site.

Two things are certain: The 1938 building on Minor Street, a vacant segregation-era school for black children, will be renovated into a student services and community center, and early learning classrooms will be built on the property, assuming the state Department of Education gives CCSD permission. Exactly where those classrooms will be located and what form they will take remain to be seen.

Although the Minor Street building has some water damage, lacks some of its original windows and has had new features like wainscotting layered on top of the old, it’s in “pretty good shape” overall, according to historic preservation consultant Barbara Black.

CCSD and Lawrenceville-based architectural firm Lindsay Pope Brayfield and Associates held the first of what will be several workshops to draw up plans for the site on Jan. 14. Lindsay Pope Brayfield has designed several schools for CCSD, including renovations to the historic Barrow and Chase Street elementary schools.

Stormwater runoff challenges and the dilapidated condition of two 1950s buildings on the property led engineers to recommend that those two buildings be torn down, although Black said there will be an opportunity to honor the buildings’ silhouettes or at least document them. “In theory, there would be an approach that considers components of those buildings,” Black said.

Historic Athens Executive Director Tommy Valentine objected to dooming the two 1950s buildings. They represent a different time period in education, when school districts tried to stave off integration by “equalizing” black and white schools, as opposed to the Jim Crow era, he said. Those buildings are “beyond saving,” though, according to CCSD SPLOST Director John Gilbreath.

Factor in a need for more parking, and space is at a premium. The state Department of Education requires at least 5 acres for a school, and the West Broad property is only 3. Future meetings will be devoted to figuring out how to fit all the components—such as parking and a new 10-classroom early learning center—on the site. “We’ve got a 5-gallon bucket and 10 gallons of stuff, so we’ve got to see how it fits,” Gilbreath said.

Fallout from the years-long controversy surrounding the Athens Land Trust’s West Broad Market Garden remained apparent at the meeting. One proponent of former superintendent Demond Means’ plan for early learning classrooms, William Breeding, warned of “elements that will sabotage it and say it’s too much money or something.” Athens NAACP President Alvin Sheats also expressed skepticism that the project will move forward as advertised.

A split was also apparent between those whose main concern is preservation and those who want the early learning center to be the priority. With a $10 million budget, school board member Patricia Yager said it may come down to one or the other, although more funding could be added when ESPLOST goes before voters again in 2021. But they’re not mutually exclusive goals, Valentine argued. “The preservation is part of the education,” he said.