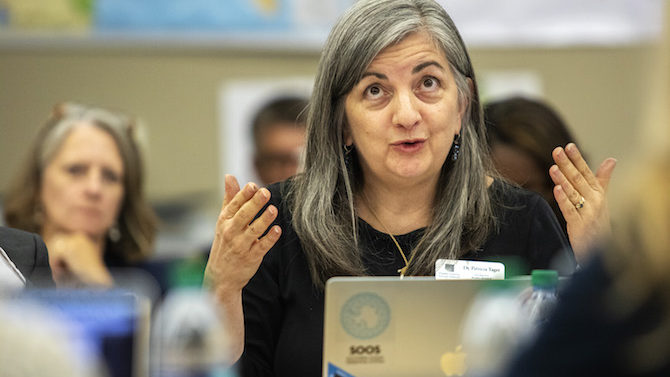 Superintendent Demond Means and Clarke County Board of Education members continued quarrelling at a work session last week, this time over Means’ plan to deemphasize a parent advisory board, as well as an ongoing disagreement over plans for a new Clarke County School District central office.

Administrators have been searching for a new central office since CCSD sold its Mitchell Bridge Road headquarters in 2016 to nonprofit Advantage Behavioral Health Systems for $2.6 million because former superintendent Philip Lanoue wanted to move to a more central location. At various times, they looked at the West Broad School, the former Macy’s at Georgia Square Mall, the old Hobby Lobby off Atlanta Highway and the Georgia Power building on Prince Avenue before settling on a building at 394 S. Milledge Ave. It’s currently occupied by the UGA alumni association and fundraisers, who are moving into One Press Place downtown.

BOE members raised questions about the $11 million price tag and expressed other concerns at a meeting last month. Means then changed his recommendation to spending $8 million to $9 million on a new structure at the old Gaines School site, previously used to house students whose schools were being rebuilt, but which is no longer needed for that purpose. Still, he made it clear that he prefers the South Milledge option.

“I think we acknowledged earlier, the governance culture is awkward and intense,” Means said. “As superintendent, I’ve never put forward a recommendation I didn’t believe in. This is the first time.”

Means warned the board that locating the central office at Old Gaines could cramp plans for a public library, entrepreneurship program and Boys & Girls Club on the property. Costs could also balloon over estimates. But if the decision is put off any longer, “we’re putting the career academy in jeopardy,” he said. Most administrators are currently sharing the H.T. Edwards building with the growing career academy, which needs more space. Some others are housed at Whitehead Elementary, which will eventually need that space for classrooms. The split means that administrators can’t always walk down the hall to talk to each other, or have to use makeshift office space in another building, Means said. “It actually puts children in jeopardy,” he said.

According to Means, the seller has agreed to give the district another 30 days to do an appraisal. The board will vote on whether to cancel the contract on 394 S. Milledge, extend it, move on to Old Gaines or some other option at its Oct. 10 meeting.

Earlier in the meeting, Means told board members he is forming a new advisory group made up of members of parent-teacher organizations and Local School Governance Teams, which make school-level decisions as part of CCSD’s charter agreement with the state. That will improve communication between the administration and parents, because the existing parent advisory board has no organization to report back to, he said.

Several board members pushed back against sidelining the parent advisory board. “I think they feel shut out,” Patricia Yager said. “I don’t think we should be shutting down something that seems important to parents in our district.”

Means called that “a perspective,” and said “this discussion highlights a governance challenge that is clear and present right now.” Board members shouldn’t be involved in how he chooses to communicate with parents, Means said. President LaKeisha Gantt asked how board members should express their concerns, and Yager said she had asked Means how best to pass along constituents’ opinions to him, but didn’t receive an answer. “You may not have liked the answer, but you were given an answer,” Means replied.

A financial presentation following that discussion included information about CCSD’s legal expenses, but did not list the $15,000 a year Means is paying an attorney from a firm in Wisconsin, his previous home. Board member Greg Davis inquired about the discrepancy. “We’ll get back to you,” Means said.

In other business, ACC Manager Blaine Williams briefed the board on tax allocation districts, a redevelopment tool ACC officials are considering using for the downtown and Newton Bridge Road area. And Human Resources Director Lynn Dukes told the board that CCSD needs to start offering signing bonuses if it hopes to recruit and retain top young teachers.