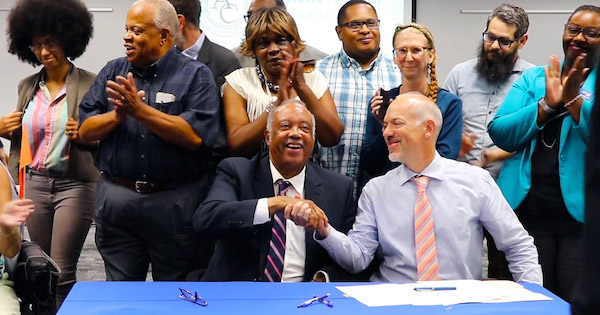 Mayor Kelly Girtz signed an agreement on the Bethel Midtown Village redevelopment last week with Valdon Daniel, chairman of the Athens Housing Authority. The Athens-Clarke County Commission approved the memorandum of understanding last Tuesday at its monthly voting session, and it was signed the following day at a joint meeting of the two boards that doubled as an open house. The MOU describes the commission’s intent to use $39 million from SPLOST 2020 to support this redevelopment, called the “North Athens Project,” if and when voters approve SPLOST in November.

Bethel Midtown Village was built in the 1960s and is showing its age. According to Commissioner Melissa Link, the housing project is in “terrible, terrible shape” because the previous owner, Atlanta-based H.J. Russell, has not done the necessary maintenance. Even so, Bethel sits on some very valuable downtown real estate. For residents of Bethel, an unwelcome but likely outcome might have been a new luxury apartment complex on the site where their homes once stood. “If we hadn’t gotten our hands on this property, it would have gone to a private developer, and you might have The Mark 2 there,” said Link, referring to a downtown student apartment complex.

Rick Parker, executive director of the AHA, promised complete transparency through “dozens and dozens” of meetings with residents going forward. According to Parker, residents will even be involved in shaping the final design of the project. Residents will be fully reimbursed for their moving expenses during the construction, which will happen in a phased manner. Due to a number of vacant units in Bethel and the phased construction plan, it’s possible that residents who choose to stay during construction will be allowed to do so.

After construction, all residents will have the right of return. This is guaranteed by federal law and by their leases. Rents are likewise guaranteed to stay the same after redevelopment. The U.S. Department of Housing and Urban Development requires them to pay 30% of their income in rent and utilities, so that is what they will continue to pay post-redevelopment.

The North Athens Project—which might extend beyond Bethel to include AHA property to the north along College Avenue and local government property on Dougherty Street to the south—has the potential to transform a blighted area, grow affordable housing in Athens and improve the lives of Bethel residents. Yet the plan is not without its critics. Some at the meetings compared it to the forced dislocation of black Athenians during the period of “urban renewal” in the 1960s. (Bethel itself was built after an African-American neighborhood called The Bottom was razed.) Commissioner Ovita Thornton, who has worked with Bethel residents for years, pushed back against this narrative, saying she had “no apology whatsoever” for the project. Thornton agreed that Athens should learn from its history, but said the “horror” of urban renewal had no chance of being repeated. “I can assure you, that is not going to happen on my watch,” she said.

The North Athens Project is still in the early phases of planning, and residents of Bethel, as well as the public at large, will have ample opportunity to weigh in as it progresses. If voters do not approve SPLOST in November, the project will be greatly scaled back, but the housing authority was clear that some renovation of Bethel will still take place. The referendum on the 11-year, $314 million SPLOST package will take place on Nov. 5. Early voting starts Monday, Oct. 14 at the Board of Elections.