School Board Lawyers Up in Face of Accreditation Threat 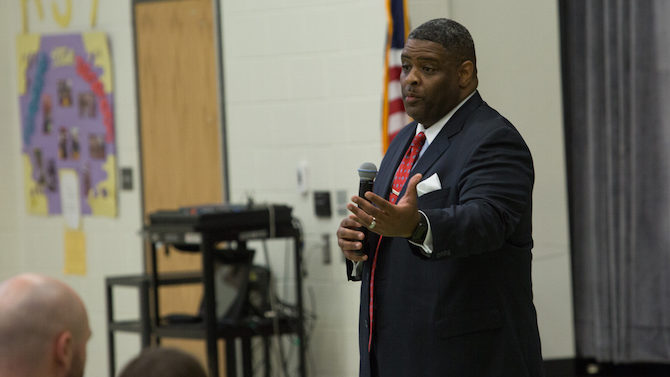 The Clarke County Board of Education voted last week to hire its own lawyer to represent the board regarding a mysterious complaint sent to the accrediting agency AdvancED, upping the stakes in an ongoing rift between the board and Superintendent Demond Means, and among board members and members of the community.

The board held a called session Aug. 29 to approve a batch of Means’ hires—a number of positions had gone unfilled weeks after the school year started—and a discussion of the AdvancED complaint was added to the agenda.

According to a summary sent to the district by AdvancED on Aug. 9 and obtained by Flagpole through an open records request, unnamed “community stakeholders” have filed complaints against “some members of the Board of Education,” again unnamed. The complaints allege that those board members lack knowledge of board policies, are working to undermine Means and micromanage the district and “are influenced by special interest groups that are satisfied with the low student performance of some groups of students, thereby support inequitable opportunities and expectations for learning across all student groups.”

Board member Greg Davis introduced a motion to approve a resolution he prepared to hire a “special counsel” and instructing the board president, LaKeisha Gantt, to appoint a committee to oversee the special counsel. Davis’ resolution expressed a fear that Means would agree with the allegations, “and thereby pursue an agenda that would result in a loss of accreditation.” If CCSD lost its accreditation, many colleges and employers would not accept its students’ diplomas, and, if Clayton County is any example, it could leave a stain on the entire community lasting a decade or more.

Means said he would refuse to recommend a special counsel to the board, and Gantt voted against the motion, but Gantt said she would work with CCSD attorney Michael Pruett to hire the special counsel. Pruett told the board that he represents the entire district—not the superintendent or individual board members—but that if the board felt it needed to bring in an outside attorney, he had no issue with it.

Gantt said she opposed the resolution because the board is “trying to fix relational problems with formalities.” Linda Davis, Kara Dyckman and Charles Worthy also voted against it, while Greg Davis, Frances Berry, Patricia Yager, John Knox and Tawana Mattox voted for it.

Readers may be more familiar with AdvancED as the Southern Association of Colleges and Schools (SACS), which pulled Clayton County’s accreditation in 2008. Further complicating matters, AdvancED is now known as Cognia.

After a dispute between Greg Davis and fellow board member Charles Worthy over rules of order—settled in favor of Davis—the board took a recess. Then, the dispute took a turn for the worse. Some board members questioned whether Means could be objective in response to AdvancED.

Although the meeting was called in part to provide further information about Means’ response to the complaint, Means declined to provide such information in light of Greg Davis’ motion to hire outside counsel. He said he would give the board a draft of his response to AdvancED (Cognia) at the Sept. 12 meeting—one day before the deadline. “The relationship is so divided at this point that I don’t see an opportunity for collaboration,” Means said. The letter from AdvancED is addressed to him alone and asks for a response from the superintendent’s office, and he said he would make clear that any response from the board is not coming from him.

“I don’t know how you can make a response without knowing the details of what’s in the complaint,” Greg Davis said. “This is the first time I’ve heard that a resolution could be passed by the board, and the superintendent would ignore it.”

Board member Tawana Mattox said it’s obvious that Means is not comfortable with the board, and the board is not comfortable with Means. She told Means, “I’m going to hold you accountable, I’m going to ask questions, and I’m not going to stop, because it’s about the children in this discussion… It seems like the board responds to the superintendent, rather than the superintendent responding to us.”

Everyone agreed that it’s about the children.

Means said he has “clarity,” unlike the board, about what AdvancED expects. He called the board “dysfunctional.” He said he’s experienced “microaggressions” like “sneers, stares and laughter” from “people of privilege” that have prevented him from doing his job. “I think this meeting tonight is going to zip it as to whether there needs to be some kind of intervention at some level,” he said.

Flagpole has requested records related to the complaint from the Alpharetta-based publicly funded nonprofit under the Georgia open records law, but has not received a response. A batch of documents CCSD released under an open records request does not include the original complaint, but does include documents that shed light on its precursor.

It is still unknown who filed the complaint made public last month. Documents obtained by Flagpole through an open records request indicate that Means communicated with AdvancED in April regarding an encounter with Knox in April. Although Means wrote to AdvancED to check on the status of the complaint in June, Means told Flagpole that he decided not to follow through with a formal complaint in hopes that relationships would improve.

Means met with Knox in April and alleged that Knox inappropriately warned him not to fire a principal at an Eastside school, and informed AdvancED of that interaction. School board members are not allowed to interfere with personnel, except for approving the superintendent’s recommendations.

In an Apr. 10 letter, Means accused Knox of “unprofessional and threatening behavior,” saying that he had “never been as demeaned and mistreated professionally by a board member as during our meeting.” Knox’s advocacy for the principal—whose name is redacted—”reinforces unspoken community tensions and underlies your governance inconsistency.”

Then-president Jared Bybee, who has since resigned and moved away, wrote to other board members to say that he and Vice President Linda Davis approved of Means’ decision. Means told Flagpole that he dropped the April complaint in June. According to Andrea Jolliffe of the district’s law firm, Hall Booth Smith, AdvancED said the “information submitted in April ‘serves as evidence rather than the official complaint.’”

Because Worthy had strongly reiterated at the meeting that the board president is the only person authorized to speak to reporters, Knox insisted that Gantt be present for an interview. After going through multiple phrasings of questions until Knox felt comfortable with one that didn’t violate board policy, he said he came to Means to give him advice about potential repercussions in his role as a board member. But he didn’t want to dispute the narrative Means had given other board members at the time, because he didn’t want to start a fight. “There’s a different narrative, but it’s probably not the time to share with you that narrative,” he said.

The mood was much more cordial when the school board met with the Athens-Clarke County Commission last week for the first time in years to discuss issues of mutual interest, such as economic development and housing.

Athens’ population is growing at about a 1.5% clip annually, and the school district’s population is also growing, from 12,700 in 2017 to 14,000 in the current school year, according to Means. Athens’ growth rate, as well as where those new residents will live, are relevant to CCSD because they’ll dictate when and where the district builds new schools. Yet Coile and Burney-Harris-Lyons middle schools were built with no regard for development patterns—the former in an industrial zone and the later in a rural area near the Jackson County line—and no dialogue with county planners, because CCSD was simply looking for cheap land, said Commissioner Melissa Link and school board member Greg Davis, who participated on a team that looked at housing. The team learned that developers have applied for 300 building permits for single-family housing in the Cleveland Road Elementary attendance zone, which is the smallest of Clarke County’s 14 elementary schools.

ACC is getting ready to update its future land-use map, which will guide future growth, for the first time in 20 years, Planning Director Brad Griffin told the group—information that will be useful if and when CCSD ever decides to build the planned Easom Elementary on the Eastside and a new Westside elementary school.

As CCSD prepares students for careers, ACC Economic Development Director Michelle Nguyen urged school board members to keep health care and manufacturing in mind. While Athens’ largest employment sector is education, there is “a huge need for health-care practitioners,” which is the second-largest sector, she said. Meanwhile, Athens has a surplus of people seeking jobs like food prep.

Many people have a “cultural bias” against manufacturing, Nguyen said, but “it’s 2019 now,” and those jobs aren’t nearly as dirty or dangerous as they used to be. Advanced manufacturing jobs often don’t require a college degree and can pay $60,000 a year or more, she said.

The economic development team wondered whether students and parents know those opportunities exist, and whether students are learning the “soft skills” and financial literacy to take advantage of them. It suggested that CCSD organize field trips for students to visit local businesses and learn what they do, and that ACC use incentives like tax abatements to encourage companies to hire a diverse workforce.

Attendees made plans to meet more regularly, and perhaps send liasons to each others’ meetings. “We’ve learned so much in just these few hours,” Commissioner Russell Edwards said. “I pray we do it again.”