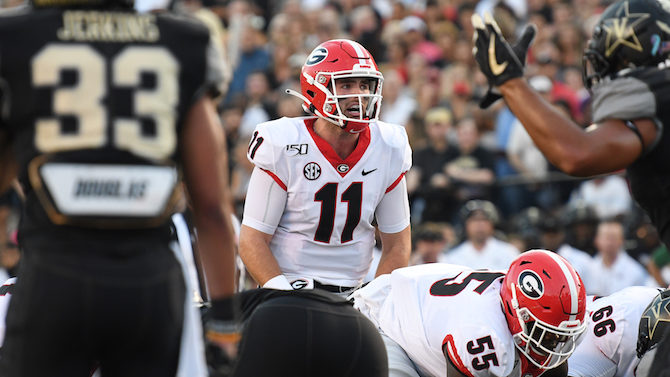 While the rest of the SEC East was busy punching itself in the dick, Georgia’s 2019 season opened just as most expected. Followed by a Sea of Red that took over Nashville and made us another temporary home on the road, Kirby Smart’s Dawgs beat Vandy 30-6 as easily and efficiently as we’ve come to expect. But the win was far from flashy and farther from perfect.

What worked was familiar. The offensive line and running backs were dominant as they racked up 323 rushing yards, 142 from D’Andre Swift. Jake Fromm was as game-manage-y as ever, passing for 156 yards and a touchdown. Rodrigo Blankenship was, well, Rodrigo, and hit three field goals including a 50-yarder.

Unfortunately, what didn’t work was also familiar. There were still issues finishing drives in the red zone. There were still issues with stale play calling, even with the switch from Jim Chaney to James Coley. There were still plenty of mental mistakes and penalties that cost us big plays on both offense and defense. The defense is full of raw talent that plays aggressively but lacks the discipline that comes with experience. Ditto the receivers.

The Dawgs can, of course, guarantee a spot in the playoff by running the table and winning the SEC Championship. But if they want a chance in any other scenario, they need style points. They have to impress enough that if there’s a tossup between Georgia and Alabama or another conference winner in any number of convoluted CFP scenarios, the committee gives the Dawgs the benefit of the doubt. By that measure, Saturday could have gone better.

Fromm will also have to play under the weight of comparisons all season. In the offseason, Fromm was considered a dark horse Heisman candidate a tier below QBs such as Tua Tagavailoa of Alabama and Trevor Lawrence of Clemson. While Fromm was his typically steady self against Vandy, Tua put on a show, passing for 336 yards and four TDs. Trevor only threw for 168 yards, a touchdown and two interceptions against Georgia Tech, so Fromm actually played better than him through one week.

But that’s what Fromm is compared to externally by pundits and neutrals. Georgia fans will compare him to Washington’s Jacob Eason and Ohio State’s Justin Fields, two former UGA quarterbacks who transferred after they were unable to unseat Fromm as the starter. Eason passed for 349 yards and four touchdowns, while Fields passed for 294 yards and four touchdowns plus a 51-yard rushing score. It will be open an open question from now until the end of these players career—and probably beyond—whether Smart made the right decision sticking with Fromm.

The two new coordinators will also be compared with their predecessors. New offensive coordinator Coley is walking on sunshine right now. Despite its trouble scoring at times, his offense racked up 479 total yards and looked able to run the ball on anyone. His predecessor, Chaney, helped Tennessee to a home loss to Georgia State. (Excuse me, I just need a moment to cackle to myself.) Dan Lanning lacks the experience of former defensive coordinator, Mel Tucker, but he did well for his first-ever game as a DC. It was a promising showing from the coordinators all around.

I know these constant comparisons aren’t the best way to enjoy a game or a season. It’s important to just revel in a 24-point win, too. But the constant comparisons are necessary to answer the question that is central to Georgia football program at this moment: Do we live up to the standard we’ve set for ourselves? I guess we’ll get our answer over the next four months.