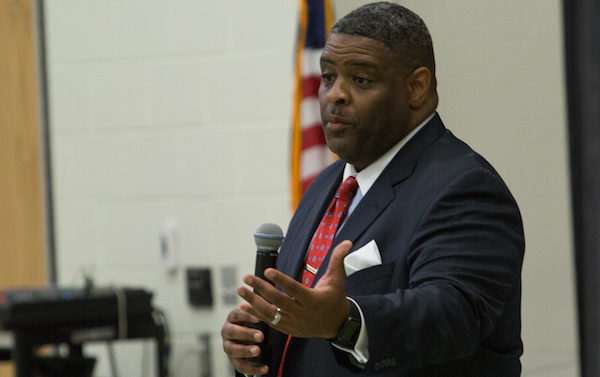 Facilities employees with the Clarke County School District are evaluating a building for possible purchase as a new administrative headquarters, an oversight committee learned last week. The administration needs to be housed in a building with 60,000–70,000 square feet, big enough for 93 offices, Superintendent Demond Means said.

Administrative offices are currently in the H.T. Edwards Building, the annex at Whitehead Elementary and on Paradise Boulevard. Means said the Athens Community Career Academy needs the space in H.T. Edwards—this year, it has 320 students enrolled, compared to 170 last year.

Means wouldn’t say which building is under consideration as a headquarters, but 1001 Prince Ave., known as the Georgia Power building, is out. Georgia Power owns the parking lot, and multiple members of a family own the building, Means said, making for too many “complications.” The district also looked at vacant space in Georgia Square Mall but decided no, he said.

The school district will pay for the new central office—as well as additions at Chase Street and Gaines elementary schools, athletic upgrades at Clarke Central and Cedar Shoals high schools and an early learning center at the West Broad School—using $35 million “left over” from ESPLOST V.  Passed in 2016, that tax was estimated to generate about $111 million over five years, but higher revenues now put that projection at $115 million.

In promoting ESPLOST in 2016, district officials and supporters said the collected taxes would be used to fund, among other projects, major renovations and/or new additions at all four middle schools—Hilsman, Clarke, Coile and Burney-Harris-Lyons. The language of the referendum itself doesn’t specific what, exactly, the money will be used for, as it does for the county’s SPLOST referendum.

In November 2018, Means said that instead of spending money on Clarke Middle, funds would be spent on building a new elementary school on Vincent Drive that would draw students from Chase, Whitehead and Timothy. That school is now off the table, but a new Clarke Middle School isn’t on the horizon until monies start to roll in with the next ESPLOST.

In 2023, Clarke Middle School will likely receive a complete rebuild, as did Hilsman, according to John Gilbraith, director of facility planning and construction for the district. He said the school needs more than just paint and an upgraded HVAC system, and he wanted to avoid tackling problems in phases, as at Clarke Central.

When Hilsman opens its doors later this month—possibly Aug. 26—students will walk into a brand new, state-of-the-art facility, Gilbraith said. The photos he showed of Hilsman, still under construction, reveal a beautiful and well-designed building. It cost $26.5 million, he said.

A school-based health clinic is being installed in what was the Hilsman girls’ locker room, which will serve students from Gaines, Hilsman and, eventually, Cedar Shoals. It will have four examination rooms, a lab and a reception area, Gilbraith said, and will be staffed by the Athens Neighborhood Health Clinic. The Piedmont Foundation donated $300,000 to the clinic, about half of which is being used for the construction. The remaining grant money will cover the cost of medical and dental equipment, travel to conferences and care for uninsured children. Advantage Behavioral Health System is providing mental health services.

Means told the oversight committee there will also be a health clinic in the old West Broad School, with the Athens Neighborhood Health Clinic providing medical services there as well. Mae Walter, president of the clinic’s board of directors, said Means is mistaken.

“That possibility hasn’t come before the board and isn’t on our agenda,” Walter said. “We haven’t discussed that idea. We want to first get the clinic at Hilsman up and running and see how that works out.”