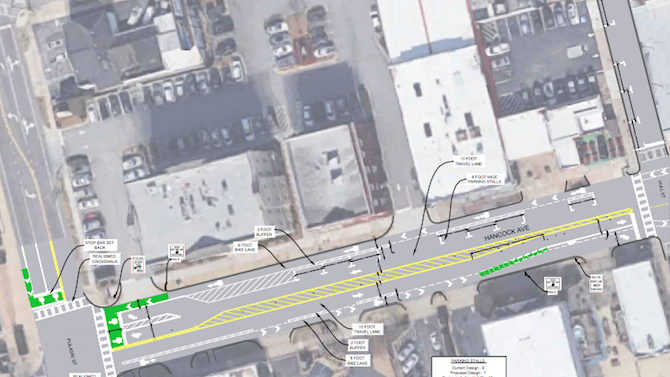 Athens is getting its first permanent protected bike lane after the Athens-Clarke County Commission voted to add a buffered bike lane on Hancock Avenue, as well as an unprotected one on College Avenue, providing a safer way for cyclists to get downtown.

On College, a “climbing lane” will run from Elizabeth Street south up the hill to City Hall, with another bike lane on the other side running north to Hoyt Street. On Hancock, a painted buffer will separate the bike lanes from car traffic between College and Pulaski Street. On-street parking will be moved away from the curb on Hancock between Pulaski and Hull Street, creating an additional buffer.

“This is going to increase, I hope greatly increase, the number of cyclists we have coming downtown,” said Commissioner Tim Denson. Infrastructure will have to be geared more toward cyclists and pedestrians than drivers to fulfill the commission’s commitment to 100 percent renewable energy, he said.

The plan will actually add a net total of six parking spaces, Commissioner Melissa Link said, but research indicates that bike lanes actually bring customers to commercial areas rather than deter drivers. Besides, “the point is to not need as many parking spaces, because people find it easier to get on their bikes and go downtown,” she said. Link said she spoke to Hancock Avenue brewery Creature Comforts and learned that the configuration will actually make it easier for trucks to back into its loading dock.

The new configuration had some detractors on the commission. The painted buffer doesn’t truly protect cyclists, because drivers could still pull up to the curb, Commissioner Mike Hamby said. “Is this the best we can do?” he wondered, asking to hold the plan for a month to develop other options.

NeSmith and commissioners Allison Wright and Ovita Thornton voted for Hamby’s motion to delay, but it failed 5–4. (Commissioner Andy Herod was absent.) The plan favored by the county Transportation and Public Works Department—and the county’s new bicycle and pedestrian safety coordinator, Hilary Essig—was then approved unanimously.

In addition, the commission unanimously approved a reconfiguration of Hawthorne Avenue and Oglethorpe Avenue to make the intersection safer, with some tweaks proposed by Denson and Link. Commissioners opted for a signalized intersection over a much more expensive roundabout.

The Classic Center also made a push at the July 2 meeting to add partial funding for a $70 million arena to the list of projects funded by SPLOST, the 1 percent sales tax for capital expenses. The Classic Center has commitments from the private sector to fund “over half” of the cost, Richard Boone, the chairman of the authority that oversees its operations, told commissioners. He said the arena would have a $33 million annual economic impact and create 600 living-wage jobs.

Several Classic Center employees told commissioners about their careers in hospitality, and vendors and representatives from Athens Tech and Piedmont College, which have hospitality programs, also touted the arena. Hotel executive Missy Brandt Wilson, a former salesperson at the Athens Convention and Visitors Bureau, said the arena would boost hotel stays, which are languishing around 60 percent, compared to 70 percent for other cities with convention centers in Georgia, like Macon and Augusta.

However, the progressive political group Athens for Everyone continues to oppose the arena, board member Erin Stacer said. “We believe that money could be used for a lot of other projects that otherwise may not have any funding from anywhere else,” she said.

SPLOST 2020 was on the commission’s agenda last week, but commissioners didn’t discuss it. They’ll have a work session on the topic July 10, and are scheduled to vote on a final project list July 16.

During the public comment period, members of Athens for Everyone and Dignidad Inmigrante en Athens asked the commission to protect undocumented immigrants from the Trump Administration. “The migrant community has been living in constant fear of ICE raids and roadblocks,” said Alia Ghosheh. In particular, they want police to stop arresting people for driving without a license, because immigrants without proper documentation are not allowed to get driver’s licenses in Georgia.

Mayor Kelly Girtz said the ACC police department’s policy is to cite and release people who are caught driving without a license, as long as they can produce some form of identification, rather than take them to jail, where Immigration and Customs Enforcement might deport them. But Denson asked whether that policy applied to people without driver’s licenses or only those who have one, but it’s not on them at the time. “I hope we can make that explicit and have a very public conversation about that,” Link said. “We want to have a policy where we make sure our immigrant community is safe.”

Another speaker, Aaron Gregory, president of the local chapter of the National Organization to Reform Marijuana Laws (NORML), pulled what appeared to be a marijuana bud out of a prescription pill bottle while telling the commission he’s leaving Athens because he was arrested for pot possession during an illegal search. “There’s a flower that grows out in the desert, and they call it hope,” Gregory said. “You can get it at an apothecary shop on Flamingo Road in Las Vegas, Nevada, and I’m going to be heading over there.”

Mark McConnell, executive director of the Georgia Climate Change Coalition, said the Solarize Athens program, which provided incentives for local businesses and homeowners to put solar panels on their roofs, is returning to Athens.

Former commissioner Carl Jordan said flashing beacons at crosswalks are hard to see and should be a standard height. He—along with several other Westside residents—also asked for the speed limit to be lowered on Timothy Road, Mitchell Bridge Road, Epps Bridge Road and Jennings Mill Parkway. Link said technical standards for roads will be discussed at this week’s work session.

During commissioners’ comment period, Thornton said that mail had not been delivered to Bethel Midtown Village for over a week. Patrick Davenport asked for Airbnb rentals to be assigned to a committee. Russell Edwards asked for a study on UGA and Piedmont Athens Regional wages. And NeSmith said he wants more regulations on private trash haulers and a museum in the Costa Building next to City Hall.