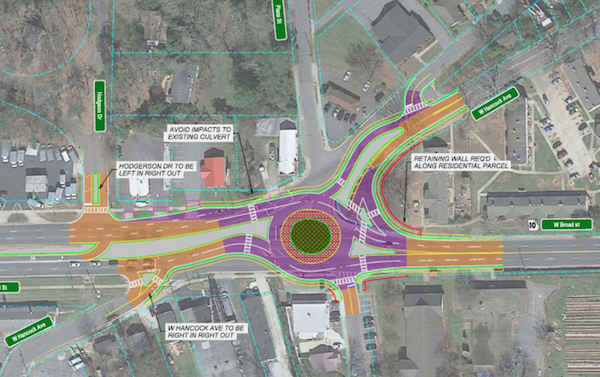 At its May 7 voting meeting, the commission opted to put off a preliminary decision on a roundabout at the Broad Street-Hancock Avenue intersection and sidewalks in the West Broad neighborhood, saying that residents need a chance to learn more about the projects and give input.

Initially, several commissioners—including Melissa Link, Tim Denson, Allison Wright and Jerry NeSmith—had proposed moving forward with a preliminary design for the roundabout and sidewalks on Paris Street and Henderson Extension while delaying a decision on a more controversial Waddell Street sidewalk, which would cost over $1 million because of the steep topography and wipe out some residents’ yards.

Although the county has been building sidewalks around the Early Learning Center and Career Academy for several years, and an open house was held at Hill First Baptist Church in March, several people told commissioners they had just heard about the projects.

“We should not have people coming to us saying they don’t know what’s going on,” Commissioner Ovita Thornton said. Another public hearing was scheduled for Tuesday.

Link said she’d prefer to vote on the projects individually rather than as a package to avoid any confusion. “I’d rather put the whole thing on hold so we can be assured that when the community has this input, everybody knows what’s being discussed and what the segments are,” she said.

ACC has about $4.5 million in sales-tax revenue to spend on transportation improvements in the West Broad area. The state Department of Transportation has offered to split costs on a roundabout, which would calm traffic and allow for crosswalks at the Broad-Hancock intersection but could require the closure of The Plaza, which Hancock and Glenhaven residents are concerned could push cut-through traffic onto their street. GDOT is expected to say how serious it is about the project in June, ACC Manager Blaine Williams told commissioners. The project is in the very early design stages and would have to go through several steps of approval before construction starts.

The commission also voted unanimously to allow police officers who live outside of Clarke County to take their cars home. The take-home policy began as an incentive for ACCPD officers to live in Clarke County, but it doesn’t seem to have worked—half still live outside of the county, perhaps because of housing costs or family ties, officials speculated. But it’s been driving a wedge between officers who live in and outside of Clarke County and hurting morale. Several commissioners said they’d like to see recruitment efforts focus on people who already live in Clarke County and use ACC youth development programs to steer children toward careers in law enforcement.

A “pocket neighborhood” or “cottage courtyard” in Normaltown also won approval. A style of development that was popular around the turn of the 20th Century (see Addieville off Barber Street), it has recently returned to popularity as a way to boost density in neighborhoods without affecting their character. The development, proposed by Normaltown resident Matt Tingle, consists of seven small-ish single-family homes or cottages centered around a common greenspace on about an acre off Millard Street.

Two nearby residents raised concerns about rezoning the property to allow for higher density, its insular nature and lack of pedestrian access to Hawthorne Avenue. But Link and Denson said they heard from many more people who are excited about the project. Tingle went “above and beyond what most developers do” to seek neighborhood input, Denson said.

While the $200,000-$300,000 price point may not be affordable for many, commissioners said they think building more housing in Normaltown will help relieve the upward pressure on existing home prices. “If we’re going to get real about our housing needs in the community, we’re going to have to upzone here and there and find pockets where we can add density without impacting the surrounding neighborhood,” Link said.