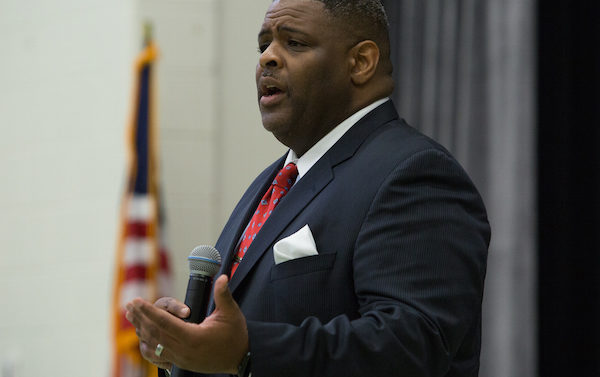 Although it’s not shown in the first few minutes of the Clarke County School District’s YouTube video, the May 2 school board work session began with a skirmish over how the meeting itself would be conducted and what, exactly, the board would discuss. Board President Jared Bybee added “presidential succession” to the published list of agenda items, saying that, as board president, he had the right to do so after talking to Vice President Linda Davis and Superintendent Demond Means.

Bybee is moving to California in June. Board member John Knox suggested that Bybee resign his position and not vote for the next board president. Knox said departing board presidents, in his experience, “usually resign their office and their seat simultaneously.” The person who resigns doesn’t participate in elections; those who have a say in decisions are people who will be there in the future, Knox said. Bybee didn’t respond directly to Knox’s comments but said, “I’m thinking of what makes the most sense for the board.”

UGA education professor Richard Welsh presented his Analysis of Student Trends and Disproportionalities in Disciplinary Infraction and Consequences. He found students who are African American, male, homeless or with disabilities are referred for disciplinary infractions at disproportionately higher levels than their district enrollment. Hispanic, Asian, white, English language learners and gifted students are disciplined at lower rates relative to district enrollment. The report says between 2015–2018, infractions in elementary schools increased by 792 incidents (52%), in middle schools, by 2,701 (109%), and infractions in high schools increased by 789 incidents (28%).

Thirteen behavior specialists will be working in the school district in the coming academic year. CCSD administrators are scaling back the amount of support for special education services received from the University of Georgia, saying they can better serve students with district employees.

Means said he is emphasizing “equity in action.” Right now, teachers are working in a system set up to ensure children wouldn’t succeed, he said, and teachers need to hold themselves accountable and commit to equity-focused decision-making. He referred to a Mar. 5 letter sent to CCSD staff encouraging them to be committed to do “love work.”

Means also said he believes many CCSD teachers aren’t prepared to handle the challenging students found in Athens public schools. He wants to reduce the need for new teachers and “win the competition for top talent,” finding people who know how to work in an urban environment. In competing for new teachers, other school districts are offering likely candidates contracts “right on the spot,” Means said. Some are offering signing bonuses. He wants to attract “mission aligned” people.