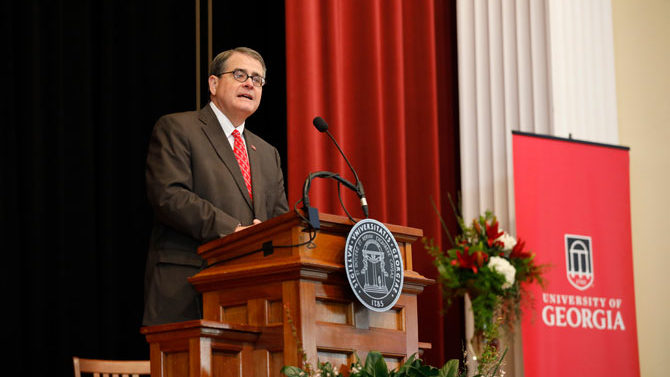 The University of Georgia is planning an “innovation district” near downtown Athens to train students in entrepreneurship, President Jere Morehead announced during his annual State of the University speech Jan. 30.

Morehead said he has instructed his staff to find space for the innovation district on UGA-owned property near Broad and Oconee streets. It will include a startup incubator for faculty and alumni, coworking space and offices for “industry partners” who want to collaborate with students and faculty. The district is part of Morehead’s vision for a “campus of the future” that’s a hub for startups and research commercialization.

“Our innovation ecosystem is booming. A movement is already underway,” he said. “This is our moment to accelerate, and we must seize it.”

UGA spent $453 million on research last year, up 30 percent from 2013. The university was also recently ranked No. 1 in the nation for using that research to bring products to market. UGA researchers introduced more than 50 new products last year, many of them in agriculture, Georgia’s top industry, Morehead said.

Morehead said he is introducing semester-long innovation fellowships for faculty members to help them commercialize their ideas and inventions, and an extended orientation camp to introduce students to UGA’s culture of innovation and entrepreneurship.

Among the figures Morehead cited in his speech: UGA’s economic impact on the state of Georgia is $6.3 billion annually. A record 68 percent of students now finish their degrees in four years, and 86 percent in six years or less. And 96 percent of new graduates find jobs or enroll in graduate school within six months, also a record.

UGA also set a record for fundraising last year at $242 million, putting it on pace to exceed its goal of raising $1.2 billion by 2020. That money has helped endow 71 new professorships and need-based scholarships for 350 students, he said.

In addition, Morehead announced that he has appointed a committee to create a new strategic plan for 2020–2025. He is also continuing two recently established grant programs: one for interdisciplinary research seeking solutions to “the grand challenges of our time,” and another that assists first-generation, rural and underrepresented students.