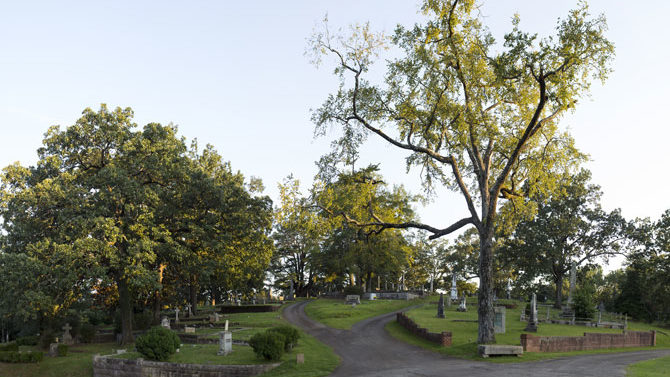 Athens-Clarke County has reached a tentative agreement with the Oconee Hills Cemetery Board of Trustees to build a section of the North Oconee River Greenway through the historic cemetery just east of the University of Georgia campus.

ACC officials and trustees had been at an impasse for more than two years over trustees’ concerns about potential littering, desecration of graves or funerals being interrupted if people were allowed access to the cemetery from the greenway. Now county officials want to include a fence with decorative gates separating the greenway from the cemetery.

“Really, the breakthrough was, when we were out there with the trustees—who were really excellent to work with—basically, we had to separate the trail from the cemetery… You get through there, then you get to Carr’s Hill and East Campus,” ACC Manager Blaine Williams said.

But there are still details left to be worked out, according to Tom Wilfong, president of the board of trustees.

In the spring of 2018, Blaine Williams and Derek Doster, representing the ACC government, outlined to the trustees a general proposal for the extension of the Greenway through the cemetery. Williams and Doster asked for an assurance of good faith on the trustees’ part before they ordered expensive soil tests in the bridge area of the cemetery. The trustees voted in June to accept the basic outlines of the proposal subject to  subsequent negotiations on the particulars. The most outstanding issues were and are: (1) price of the requested easement; (2) guarantees of security for the cemetery; (3) guarantees of reimbursement for any damage to the cemetery or its infrastructure during construction; and (4) agreement on length of time the bridge across the Oconee River will be closed. Negotiations over these and other concerns have not yet taken place. Also, the city-county government assured us that there would be a series of public meetings to give interested parties a chance to express support or concerns about the proposed extension. No agreement for this extension has been signed by the cemetery’s Board of Trustees. The vote scheduled for Tuesday’s ACC Commission meeting will decide whether the city administration can proceed with negotiations with the OHC Board of Trustees.

The 3,600-foot segment is part of a larger project currently under construction that will connect the greenway’s current terminus at Dudley Park to the UGA campus, the park-and-ride lot at Oconee Street and the Loop and neighborhoods along College Station and Barnett Shoals roads, providing recreational opportunities, as well as a bike commuting route from the Eastside to campus and downtown.

The commission will vote to move forward with preliminary plans for the greenway segment at its Tuesday, Feb. 5 meeting. It’s also set to approve a land swap with Warren Blackmon for property he owns on Old Winterville Road that will allow the second phase of Firefly Trail to move forward.

Other agenda items include a pocket neighborhood in East Athens and a zoning overlay district to protect the Hancock Corridor neighborhood from an imminent development at The Varsity.

A proposed 12-home development off Dublin Street met with some pushback from neighbors who are concerned about gentrification, according to Commissioner Mariah Parker. “Folks are still concerned that they won’t be able to afford to live in this place, or that people coming in will flip it for values that they, again, won’t be able to attain,” she said at the commission’s Jan. 15 agenda-setting meeting.

Parker and Commissioner Melissa Link noted that the development includes three Athens Land Trust homes that will be affordable in perpetuity, and the market-rate “cottages” are expected to sell in the $160,000–$180,000 range, which is below the median home price in Athens. “We do need mixed income in this area,” Parker said. “It’s important to have a variety of people living in an area.”

The concept is similar to another proposed development off Millard Avenue in Normaltown that local landscape architect Bob Smith also designed, with some small homes along the street and others clustered around a common greenspace. That type of pocket neighborhood is prohibited in ACC because all new homes must front a street, but Link said they could be a solution to the proliferation of “McMansions” in urban neighborhoods where real estate is skyrocketing. “I really love this project,” Link said. “I feel like this is the type of project we need to be encouraging, especially in our in-town neighborhoods.”

The overlay district for the block surrounded by Milledge Avenue and Broad, Chase and Reese streets was held up for a month by the ACC Planning Commission, but looks set for final approval next week.

“There’s not a plan for this, at this point, for us to talk about in terms of specific design,” Planning Director Brad Griffin told commissioners. But the overlay district will provide some protection for neighbors if and when a plan is submitted.

The area is currently zoned commercial-general, which allows big-box stores and 65-foot towers built right up against the sidewalk. With the Gordy family, owners of The Varsity, interested in selling most of the block for redevelopment, the zoning overlay includes stronger setback and height requirements, and restrictions on parking and bathrooms meant to discourage student apartments. The Gordys have agreed to the zoning restrictions, and will also donate three historic homes on Reese Street to the Athens Land Trust rather than demolish them. One of those houses, the Mack-Burney House, previously owned by Athens’ first black dentists and a noted educator, could be turned into an African-American history museum. The other two will become affordable housing.

This post has been updated with a statement from the Oconee Hills Cemetery Board of Trustees.