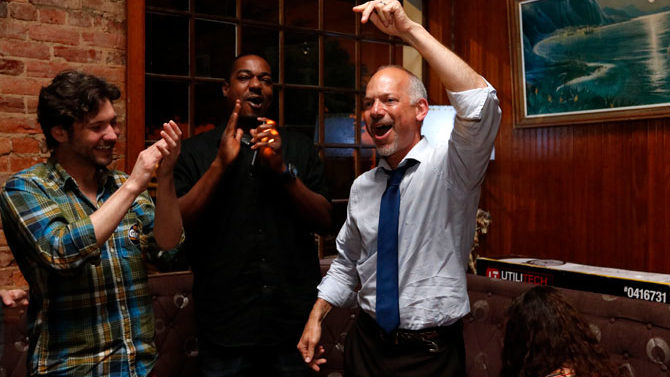 “In January, it’s a whole new Athens,” Commissioner Melissa Link told the crowd gathered at the 40 Watt Club to watch election returns May 22.

“I would not have won this without the vote of the black population and the working class,” Davenport said. “The results show the people are tired.”

To understand how this came about, let’s go back to 2011, when activists descended on a Lower Manhattan park to protest income inequality. Offshoots of Occupy Wall Street sprang up all over the country, including in Athens, where a ragtag crew of socialists, anarchists, hippies and crust punks set up tents near the Arch and City Hall. One of them was Denson, a Florida transplant with a Fidel Castro beard.

Mayor Nancy Denson didn’t like this group too much, and she tried to get the commission to pass a law prohibiting camping on public property. Although that didn’t pass, Occupy Athens had fizzled out by 2013 anyway—but not before the mayor made a few enemies.

Also around 2011, Edwards—a recent UGA law school graduate fresh off a failed run against tea party congressman Paul Broun that made him a progressive hero—organized a group called People for a Better Athens to fight a proposed downtown Walmart. Occupy Athens joined that fight, and they succeeded in running off Walmart, although the massive development on Oconee Street moved forward in a different form.

Like Occupy Athens, People for a Better Athens fizzled out after the commission approved what would become The Mark in 2013. The following year, Mayor Denson was up for re-election and widely considered invincible. No viable progressive stepped up to run against her, so Tim “No Relation” Denson did. He lost, but respectably. Melissa Link, a longtime activist who’d worked with Denson and Edwards on the Walmart fight, won a commission seat. Denson’s campaign organization morphed into Athens for Everyone.

“All this election decided was which route we’re going to take to get to an Athens for everyone,” he said during his 2014 concession speech. “The goal of this thing wasn’t to make me mayor. The goal of this movement was to help our community.”

“I have the sense that this is a continuation of people’s desire for progress that we started in the 2017 special election,” Girtz said on election night.

The new commission will be the most diverse ever, with four women and three African Americans. The results were also something of a repudiation of the older generation of progressives. People like Bailey, Tony Eubanks (who ran against Link) and Bill Overend (a candidate in District 7) have been working to make Athens a better place since the 1980s and ’90s. But they lost to candidates who are 10 or 20 years younger.

“You are a mirror of what some of us here have forgotten,” Thornton, who at 66 was the exception, told her young supporters on election night. “We have become the people we fought against in the ’60s.”

Girtz, at 44, is the old man of the bunch. Where once he was the key player in trying to find ways around Mayor Denson’s obstructionism, he’s now the grownup in the room. Parker will be sworn in to take Sims’ place in June, since hers was technically a special election because Sims resigned his seat. Girtz will be joined in January by four other new commissioners. When they’re not on the same page with him ideologically, they’ll probably be pushing him from the left. None of them except Thornton have experience in government, and the commission has lost a ton of institutional knowledge in Dickerson, Bailey and Sims, who’ve all been involved in civic life for decades. Behind the rail, rhetoric turns into real-life decisions that involve millions of dollars. It’s easy to talk about things like fare-free transit and free child care; it’s a lot harder to dig into the budget and find ways to pay for them.

The one good thing about having local elections in May, Girtz said, is that he has seven months to develop a package of legislation that will address the issues he campaigned on—economic development, affordable housing, transportation and equity—in a holistic way. It’s “an opportunity for new commissioners and current commissioners to have substantive conversations about how to put this package together,” he said.

Here’s one for Scooby and the gang: How does a person with no name recognition, no money, no campaign infrastructure and, for a time, not even a website jump into a congressional race at the last minute and wind up winning it? That’s exactly what Tabitha Johnson-Green did in the 10th Congressional District Democratic primary.

Johnson-Green was a surprise qualifier in March, when UGA philosophy professor Richard Dien Winfield and Bethlehem music educator Chalis Montgomery had been duking it out for months. Somehow, Johnson-Green wound up with 50.2 percent of the vote. Montgomery finished a distant second and Winfield third.

Lots of theories have been circulating about how Johnson-Green won: She had some sort of super-secret word-of-mouth network among African-American churches, for example, or Republicans crossed over to vote for her thinking she’d be the easiest to beat in November. The evidence doesn’t support this—the ratio of GOP to Democratic ballots pulled was what it should have been, and if Johnson-Green were actually out campaigning and gaining traction, Winfield and Montgomery’s staffers would’ve sniffed it out.

We may never know for sure, but here’s a more likely scenario: Stacey Abrams drew a lot of African-American voters to the polls who voted for the African-American candidate in the 10th. Abrams also drew a lot of less informed first-time voters to the polls who may have voted for Johnson-Green because her name was first on the ballot. And with Abrams’ huge lead in the polls, Stacey Evans supporters who would’ve voted for Montgomery wound up staying home.

In any case, Democrats should be saying “ruh roh.” Beating Rep. Jody Hice was always a long shot, but now it’s even longer.

• Athens Downtown Development Authority co-director David Lynn confirmed rumors that Target is looking at space on the ground floor of University Tower, at the corner of Broad and Lumpkin streets downtown. Target has opened about 30 small-format urban stores over the past couple of years in college towns around the country, including Chapel Hill, NC and Gainesville, FL. “I think they’re exploring the field like they would any college town,” Lynn said, but he added that the space in question has challenges, and he thinks it’s more likely than not that Target passes.

• Two items of interest on the Thursday, June 7 planning commission agenda: A developer has proposed combining four lots at 125–155 Oakland Way in Five Points and wants to build 10 houses there, which would double the current density. And revised plans for an 8,000-seat amphitheater off Commerce Road near the Loop are returning to the planning commission after a chilly reception last November.

• A full mile of the Firefly Trail between East Broad Street and the Loop is now open to the public. Firefly Trail, Inc.—a nonprofit that is working with Athens-Clarke County and other local governments to construct what will eventually be a 39-mile trail along an abandoned railroad connecting Athens with Union Point—held a walk/run/bike event last week to celebrate the opening. The existing segment can be accessed from East Broad, Dudley Park, Poplar Street, Peter Street, Inglewood Avenue and Old Winterville Road. It also connects to a new Oconee River Greenway extension via Dudley Park and Grove Street. Next up: construction of a new bridge in Dudley Park as part of T-SPLOST.

• Downtown will be jammed June 12–14 as the North Georgia Conference of the United Methodist Church meets at the Classic Center. The annual convention is one of the Classic Center’s largest and draws more than 3,000 people.