The School Board Deadlocks on the West Broad School, Again 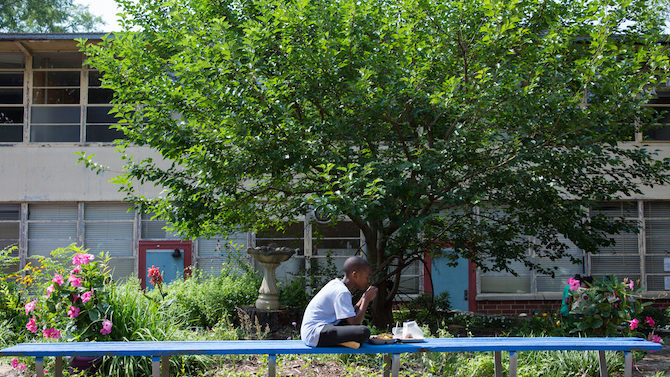 Something about the West Broad School brings out the worst in the Clarke County Board of Education. Last week, after an hour of sniping at each other, board members again deadlocked on how to proceed with the vacant school, failing to even make a decision about how to make a decision. The impasse led Superintendent Demond Means to nearly threaten to quit.

The school—shuttered after desegregation, then reopened as Rutland Academy, then closed again—has sat vacant for years. Three years ago, former superintendent Philip Lanoue floated a plan (with very little public input) to renovate the school and turn it into administrative offices. Those offices have been split between the nearby H.T. Edwards building and Whitehead Road Elementary since the district sold its Mitchell Bridge Road central offices two years ago.

The district planned to pave over the West Broad Market Garden, an Athens Land Trust project that opened at the site in 2013. Problem is, the garden is a popular community amenity that provides jobs for CCSD students and neighborhood residents alike.

With one faction wanting to save the garden and another wanting to move forward with the renovation regardless of the garden’s fate, the school board started over in March, issuing a “request for information” that resulted in three proposals for the property.

The Athens Land Trust proposed restoring the historic buildings and turning the property into a community center, including a commercial kitchen, classrooms, conference rooms, a wood shop, a health clinic, an auditorium, basketball courts and an outdoor stage, while preserving the garden and Saturday farmers market. This would be funded by $3.2 million from Athens-Clarke County’s SPLOST 2012 earmarked for “youth development” and matching grants raised by the land trust.

A proposal from the Northeast Georgia Business Alliance (a black chamber-of-commerce-type organization) and the Athens High and Burney-Harris alumni groups would include a museum, recording studio, commercial space, after-school programs, a community kitchen and business incubator, and would preserve the garden.

CCSD also submitted its own proposal, which Means said was based on board input from an August property committee meeting and the March work session. It includes additional space for early childhood education (which has a waiting list to get into), a clinic, a parent information center and space for disciplinary hearings that will offer students more privacy than holding them in schools, but makes no mention of the garden.

Means asked for permission to vet the three proposals and perhaps combine their common elements into a single proposal to bring back to the board next month. “If there is alignment with other proposals, we are ecstatic to work with those partners,” he said.

According to Means, the school buildings are not big enough to house the central offices.

Board member Charles Worthy said he wanted to stick with the plan to move the central office into the school. Space was never an issue until the garden got involved, he said. The board had asked for a space needs assessment, but it never materialized.

“That’s where the conversation derailed in March—that it’s all or nothing, we use it for district offices or not,” Means said. Board President Jared Bybee expressed hope that the issue wouldn’t become a “zero-sum game.”

Worthy also insisted that the board had to stick to the original plan because it was in CCSD’s SPLOST, but Means said “there is a level of flexibility” in how the money is spent. And Worthy argued that the March “request for information” itself was illegal, because it wasn’t a recommendation by the superintendent—which Bybee denied.

While all these discussions have been going on, the West Broad School has continued to deteriorate. “If we keep dragging our feet, we are going to lose a major piece of history, because it is rotting away,” board member Ovita Thornton said. Fellow board member Carol Williams reminded her that the land trust stepped in to preserve at least part of the property. But to board member Linda Davis, the garden has become a roadblock.

With board member Vernon Payne absent because of illness, the vote on Means’ recommendation to vet and combine the three proposals failed 4-4, with Linda Davis, Williams, Bybee and Sarah Ellis supporting it, and Greg Davis, Worthy, Thornton and John Knox in opposition. Greg Davis made a motion to have the three groups that submitted proposals sit down and hash out their differences, but it died for lack of a second. After more bickering, the board tried again on the original motion, with the same result. That’s when Means decided he’d had enough.

“If you hired me to serve as superintendent of schools, please allow me to do my job,” Means said. “I feel like we’re at a tipping point… If I can’t do this work, you are diminishing the role of the superintendent in Clarke County.”

At the end of the meeting, Thornton urged Means to speak out. “If the board does things with good intentions but it’s wrong, you’ve got to tell us,” she said.

The board will try again at its May 31 meeting. June 14 is the last meeting until August, so Means urged the board to make a decision by then, because “the community needs an answer.”