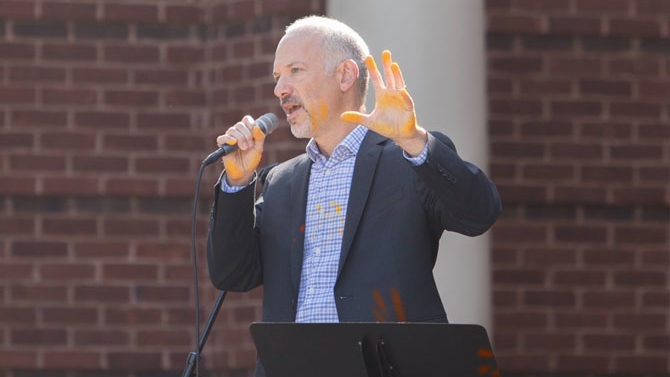 The LGBTQ vote in Athens may be up for grabs. Kelly Girtz has long been an ally of the LGBTQ community, dating back at least to a 2009 vote offering benefits to county employees’ domestic partners. Richie Knight issued a news release last week polishing his bona fides, while Harry Sims posted an open letter to Facebook seeking to reassure the community.

Knight, who is gay, said that he hosted an “LGBTQ dialogue” last Thursday. At least four LGBTQ people have been attacked locally since 2017, and safety is a primary concern, he said. Participants also voiced a desire for safe spaces and resources outside of UGA for those who are discriminated against based on sexual orientation.

Sims’ letter recounted his experiences as UGA’s first black varsity athlete. As a long jumper on the track and field team, he said another college refused to compete based on his race. “I say all this to tell you that I stand in solidarity with you,” he wrote. “I realize that my Christian faith, which is the very core of who I am, might be a source of anxiety instead of inspiration for some who fear policies I might support as your mayor. Please understand me, I will never be okay with prejudice against anyone in this town.”

In lighter news, Sims’ Cone Drive house was the victim of a (seemingly random) paintball attack last week. “If only Russell Edwards had been there to jump in front off the paintball,” quipped Sims’ campaign spokesman, Jeff Snowden. (Edwards recently performed the Heimlich maneuver on a choking woman while going door-to-door in District 7.)