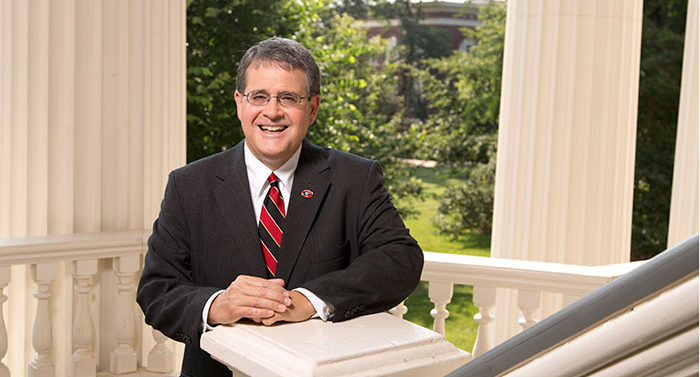 Each year about 200 seniors struggle to stay in school or withdraw for financial reasons, Morehead said during his State of the University address Jan. 23. The shortfall is sometimes less than $1,000, he said. He announced that he is creating “completion grants” of up to $2,000, using $250,000 in private funds, to help those seniors make ends meet while they earn their degrees.

That initiative is just one of several aimed at low-income UGA students fueled by an unprecedented fundraising drive that raised a record $227 million in private donations last year and is on track to reach $1.2 billion by 2020. That money funded more than 200 needed-based Georgia Commitment Scholarships last year, with the ultimate goal of 400. “That’s countless lives, countless futures, forever changed,” Morehead said.

A program to recruit and retain a diverse student body has “exceeded all expectations,” Morehead said, with more than 20 “promising” projects proposed by faculty and staff, prompting him to increase funding to $300,000.

Another new program will help rural students. “You may not realize that many of our students are from rural Georgia,” Morehead said. Some of them come from low-income backgrounds and are the first in their families to go to college.” They face unique challenges and require support, he said, so he committed $300,000 over five years to mentoring and leadership opportunities for rural students.

In the classroom, Morehead said faculty will be emphasizing writing skills and data literacy over the next three to five years—two areas where employers have said many graduates are lacking. He also announced that the university will spend $250,000 to incorporate “active learning pedagogy” into classes, and $1 million to convert select classrooms where fixed tables and chairs aren’t well-suited for collaboration into “active learning spaces.”

Morehead also said that UGA is starting a new institute called Cyber Arch to help businesses protect themselves from cyber crime, with Clarke, Griffin and Spalding counties as pilots, and is seeking funding for a STEM-based (science, technology, engineering and math) research facility. In addition, he’s appointing a task force headed by Vice President for Research David Lee and Vice President for Government Relations Griff Doyle “to develop a long-term strategic vision for an innovation district” so UGA can “play an even greater role in solving the grand challenges of our time.”