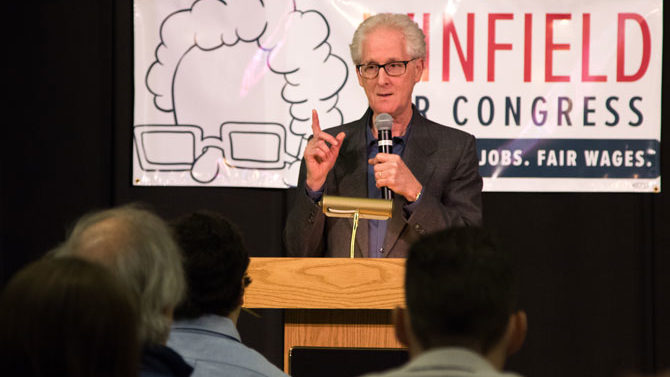 Richard Dien Winfield has the Bernie Sanders thing down pat, from the poofy white hair and wire-rimmed glasses to the New York roots to the cartoon logo. It’s actually Chalis Montgomery, though, who’s running for Congress on the Sanders platform of a $15 minimum wage and Medicare for all. Winfield has something even more ambitious—and much further to the left—in mind.

The University of Georgia philosophy professor formally entered the race against U.S. Rep. Jody Hice on Saturday, Jan. 13 at the Miriam Moore Community Center in East Athens. He’s been running unofficially for months, but delayed an announcement until now because UGA rules require that employees who run for state or federal office take a leave of absence from their jobs. That gave Montgomery—a Barrow County music teacher with a bit of charisma and a compelling personal story about her daughter falling ill with a chronic disease just as her husband lost his job—a head start in the Democratic primary. Winfield isn’t an inspirational speaker by any means, but he hopes to spread his ideas by running for political office and win on the strength of those ideas. He has already drawn national media interest in the form of a profile in The Nation last week.

He is running, essentially, on one big idea that he views as a cure-all for virtually everything ailing this nation: a guaranteed job for everyone, courtesy of the U.S. government, starting at $20 an hour and indexed to both inflation and productivity gains. “Anyone who wants to work can be assured of having a job with a fair wage and dignity,” he said.

Although unemployment is currently at 4.1 percent (most economists consider 5 percent to be full employment), Winfield sees several benefits to a New Deal-style government jobs program. It will staunch the rise in inequality and eliminate the fear of joblessness, which he blames for the hatred of immigrants and minorities in the Trump era and the rise of ethnic white nationalism both in the U.S. and around the globe. And it would pressure the private sector into raising wages when companies are competing with government for workers, rather than workers competing for jobs. Workers would never again be afraid to leave their jobs, veterans would know a job is waiting for them when their service ends, undocumented immigrants could come out of the shadows, businesses would benefit from increased consumer spending, and poverty would become a thing of the past.

Under Winfield’s plan, workers would be employed repairing and building new infrastructure (schools, public transit, broadband internet and affordable housing), in free child- and elder-care facilities, and teaching and performing arts and music. Although President Franklin D. Roosevelt died before he could implement a guaranteed jobs program, it’s similar to the Works Progress Administration and other New Deal programs.

“The market can never be relied upon to provide full employment,” Winfield said. “The government has to step in when the market fails.”

Winfield also proposed a free single-payer health care system (with no copays or deductibles, unlike Medicare or Medicaid), free access to legal representation, nine months of paid parental leave and tuition-free public colleges and universities. All of this would be paid for by taxing the top 1–2 percent, he said.

As for whether such a far-left platform could win over the staunchly conservative 10th District of Georgia, currently represented by tea-party Republican Jody Hice, Winfield argued that Trump won the district by promising jobs, and so can he.

Sound pie-in-the-sky? Sure. Jim Barksdale, the 2016 U.S. Senate nominee who introduced Winfield, warned the audience of about 100 that he’d be labeled an “impractical idealist.” So were Martin Luther King Jr. and Jesus, Barksdale said. “My message for you, Richard, and everyone here is don’t believe it,” he said.