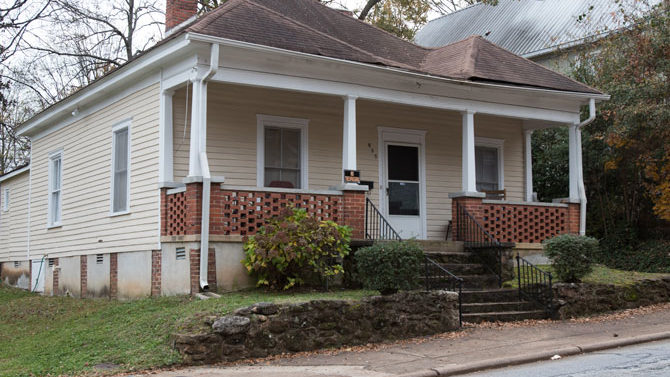 Restored in 2000, the former home of Ida Mae Johnson Hiram sits on Hancock Avenue in the Reese Street Historic District. Hiram was the first black woman licensed to practice dentistry in Georgia and a longtime, loyal member of First AME Church.

Robert Harrison, the historian for First AME Church, talked about both the house and Hiram at a recent brown bag lunch in the Lyndon House sponsored by the Athens-Clarke Heritage Foundation. Harrison is the president of Project Renew, a First AME Church nonprofit that restores properties.

A native of Athens, Ida Mae Johnson graduated from the Knox Institute, a local school for black children, before marrying Lace Hiram, an African-American dentist. After a few years of helping her husband in his practice, Ida Hiram enrolled at Meharry Medical College in Nashville, taking the couple’s young daughter, Alice, with her. In 1910, she and Alice returned to Athens, and she worked alongside her husband for years.

The family endured various setbacks: a fire in 1914 that damaged their office and residence, accusations of misconduct against Lace Hiram and dried-up business during the Depression. But in 1918, the Hirams bought the Hancock Avenue house from William Harris, Athens’ first black physician. Athens didn’t provide enough business for two black dentists in the 1930s, so while Ida Hiram continued working here, Lace Hiram moved to Washington, DC, where he set up another practice.

From the 1920s on, Ida Hiram’s office was in the Samaritan Building on West Washington Street, next to the Morton Theater. She treated both white and black patients, and her daughter worked with her in the laboratory making plates and bridges, among other duties. Hiram was in business 55 years, until 1965, when she fell and hurt her hip. She died in 1975, when she was 80. Ten years later, First AME Church bought the house.

The restoration was finished 15 years later, with $30,000 from First AME and a matching $30,000 from Athens-Clarke County. The house was then put on the market as a rental property for disabled and elderly people.

Harrison told the audience that although the church owns the house, it has remained on the tax rolls because it doesn’t meet certain criteria. The annual operational costs for the house are $5,000–$8,000, Harrison said. Since the house is in a historic district, getting the house on the National Register of Historic Places will freeze property taxes for eight years, according to AHCF Director Amy Kissane. Harrison says church officials are applying for a historic marker from the National Register.

The home of another prominent African-American Athenian has received a lots of attention in recent weeks. The house of educator Annie Mack Burney—who’s been memorialized as a namesake of Burney-Harris-Lyons Middle School—on Reese Street is threatened by potential development. A demolition moratorium now in effect may buy sufficient time for someone to move the house.