Commission Moving Ahead With Crosswalks; Fate of 100 Prince Uncertain 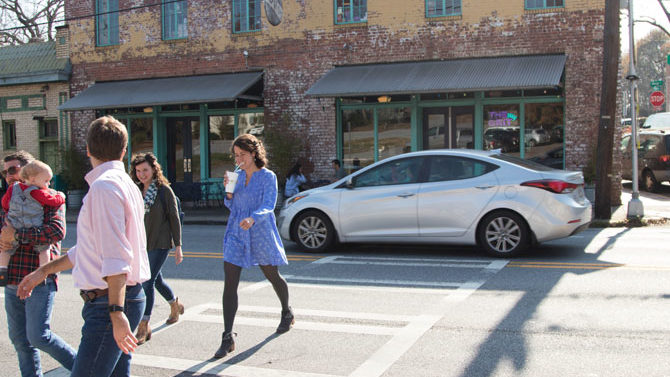 Athens-Clarke County might finally fix a notorious Prince Avenue crosswalk—but only because the fate of a long-awaited development nearby is up in the air.

“I don’t know if we should wait if word on the street is 100 Prince isn’t happening,” Commissioner Allison Wright said at a work session last week where officials discussed the crosswalk at The Grit and other potential pedestrian safety projects.

What is going on with the project on the old St. Joseph Catholic Church property at the corner of Prince and Pulaski Street? The Athens-Clarke County Commission approved the development—which includes 124 one- and two-bedroom apartments, a small grocery store and a restaurant in the historic church building—in September 2016, and the property officially changed hands on Jan. 1. Since then, nothing has happened.

“We had been told several weeks ago that issues had arisen that caused it to be put on hold,” ACC Planning Director Brad Griffin told Flagpole, “but what they were or for how long I do not know.” Developer Russ Davis of Greenville, SC-based Homes Urban did not respond to a request for comment.

When the commission selected bike and pedestrian projects for 2017, they put the Grit crosswalk on hold at Davis’ request, even as they moved forward with pedestrian islands and flashing beacons at crosswalks near Daily Groceries and Piedmont College, along with similar projects on North Avenue, Milledge Avenue, Cedar Shoals Drive and elsewhere. Davis offered to pay for pedestrian improvements near the development.

The other improved crosswalks are working. “It appears vehicle speeds are down,” traffic engineer Steve Decker said, and 85–90 percent of drivers stop when they see beacons flashing at crosswalks. “I feel much safer on those stretches of Prince Avenue,” added Commissioner Melissa Link.

But the Grit crosswalk remains a problem. People crossing to Flagpole’s parking lot on the north side of the street must stand behind a telephone pole while waiting for cars to stop, making them difficult to see. “I was there Saturday, and some asshole blew right through it,” Commissioner Andy Herod said. The Transportation and Public Works Department wants to move the crosswalk to the other side of Newton Street, near Taziki’s.

With uncertainty about whether 100 Prince will happen or not, it may not make sense to wait any longer. According to crash data collected from 2010–2015, Prince between Pulaski and Barber streets is the second-most dangerous stretch of road in Athens for cyclists and pedestrians. The Grit crosswalk is not on TPW’s list of recommended projects, but commissioners could add it before they vote on 2018’s list in February.

Another Prince project is on hold, too: Engineers have had trouble designing a realigned Cobb Street intersection with a concrete island, Decker said. That’s the fifth-most dangerous area in the city for those on foot or bikes. A road safety audit team is also reviewing alternatives to a crosswalk in front of home.made on Baxter Street, which nearby property owners objected to because the pedestrian refuge in the center turn lane would block drivers from turning left.

While Mitchell Bridge Road might not seem like a place where people do a lot of walking, Decker said he found that customers are leaving their cars at a tire shop there and going shopping on foot.

Herod questioned why the College Station Road crosswalk couldn’t be moved closer to a bus stop about 50 yards away; putting it closer to Research Drive would cut into the center lane where cars stack up to turn left from College Station onto Research, Decker said.

Herod also lobbied for another crosswalk on College Station closer to Barnett Shoals. “Students don’t want to pay to park at the vet school, so they’re parking at Kroger and dashing across College Station,” he said.

The work session was the final one for Decker, who’s served as the county’s traffic engineer for 10 years. He’s retiring this week.

ACC ‘Rain Tax’ Up for Review

Often derided as a “rain tax,” ACC’s stormwater fee is not exactly popular, but it saves homeowners money. The county adopted the fee to pay for a federally mandated program to manage stormwater in 2004 rather than raise property taxes. Because it’s a fee, the University of Georgia, Clarke County School District, churches and other tax-exempt entities pay it, spreading the burden more evenly.

But many taxpayers view it as unfair. One reason is that ACC doesn’t do stormwater projects on private property, only on public streets, which leaves some homeowners who experience flooding wondering how they benefit. “The perception is horrible: ‘Why do we have a stormwater fee if you guys won’t help me out here?’” Commissioner Jerry NeSmith said at a Nov. 28 work session.

That may change. The commission is set to hire a consultant to take a fresh look at the stormwater program. One change the consultant, Stantec, will consider is whether to expand the program to include privately owned stormwater infrastructure.

According to Herod and NeSmith, many suburban subdivisions in Athens have drainage ditches and ponds that were never deeded over to the county. “Property owners are supposed to maintain those, but they don’t,” and some aren’t even aware of their responsibility, Herod said. “It causes conflict between neighbors.”

Stormwater also causes conflict in intown neighborhoods, Link said, because runoff from infill development can flood neighboring properties. “I’ve got people with completely flooded back yards, and they can’t do anything about it,” she said. But TPW Director Drew Raessler said the county would prefer to stay out of such disputes.

Stantec will also look at how stormwater projects are funded (currently, it’s a mix of sales tax revenue and fees based on the square footage of impervious surfaces like driveways and rooftops). ACC already offers credits for stormwater mitigation like cisterns and green rooftops, and those credits could be expanded. The county could also charge developers a fee.