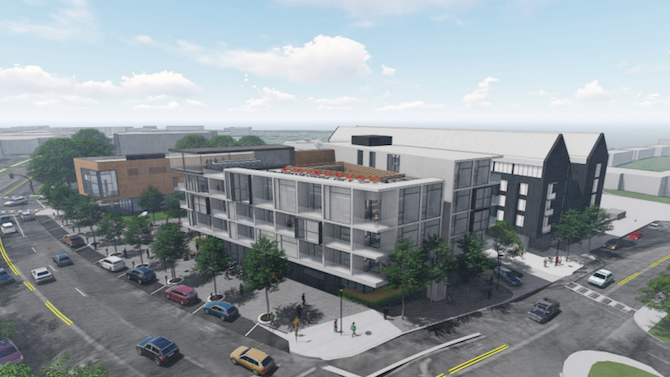 Athens-Clarke County commissioners are eyeing a deal with the owners of Hotel Indigo to sell a city-owned parking lot next door to the hotel for an expansion that would include office space for ACC economic development officials as well as a tech incubator.

The commission voted last week to enter into further talks with Athens Hospitality Holdings LLC. The framework of a potential deal calls for ACC to sell the parking lot between Strong and Dougherty streets—as well as Strong Street itself—for a little under $3 million. ACC would turn around and pay Athens Hospitality Holdings $2.4 million for 10,000 square feet of office space within the new development and pocket $550,000.

The Athens Downtown Development Authority, which manages the parking lot, had considered putting the property up for bid in cooperation with ACC, hoping to land a developer who would build offices rather than more student housing. But before that happened, the Hotel Indigo group made the county an unsolicited offer.

Hotel Indigo would build a five-story annex on the property that includes 45 upscale hotel rooms; office space for the ACC Economic Development Department; 8,000 square feet of meeting and event space; 7,000 square feet of coworking space where entrepreneurs and startups could rent desks, offices and conference rooms; a street-level restaurant; a rooftop bar; and 60 underground parking spots. Strong Street would be closed and converted into a courtyard.

The plan pulls some ideas from the abandoned Blue Heron river district proposal, such as incorporating a public-private partnership and an incubator for tech startups, Girtz said. It’s also a change of pace from the massive scale and bland brick-and-tan architecture usually seen in new downtown developments.

In addition, Hotel Indigo’s lead investor, Rick Fine, an Atlanta tech investor, would create a $3 million fund to invest in Athens startups. ACC would contribute $25,000 annually to the fund, possibly in the form of in-kind administration.

“Infrastructure for tech startups is something we’ve been talking about for years,” Link said.

The nonprofit Four Athens has been playing the role of local tech incubator—providing discounted office space to startups—for the past five years or so with some success, but has nowhere near that kind of funding and has been forced to move around. (Moore said he’s talking to Four Athens about getting involved.) The Hotel Indigo proposal would give those small and medium-sized businesses a stable base and give ACC a centerpiece to show businesses that are thinking of locating in Athens, Moore said.

In a study funded by ACC and Georgia Power, consultant Ninigret Partners found that Athens can capitalize on UGA and a growing tech industry but lacks office space. At the same time, the Classic Center expansion has created a need for more hotel rooms downtown—three new hotels are under construction now—especially at the higher end of the market, Commissioner Jerry NeSmith said.

That wasn’t the only property deal on the commission’s plate. At the agenda-setting meeting following the special called voting meeting for the Hotel Indigo proposal, commissioners also discussed buying an old school off Barber Street and selling a dam and small lake at the Loop and Commerce Road.

The Clarke County School District voted earlier this month to sell the long-abandoned North Athens School to ACC for $400,000, and the commission will vote on the agreement Dec. 2. After the building is demolished, ACC could flip the 5-acre property to a developer or use it for new Public Utilities facilities.

The state Environmental Protection Division recently told ACC that the dam is leaking, and it would cost $265,000 to repair or $414,000 to breach, so the county is looking for someone to take it off its hands.

Girtz asked if the dam and lake serve any purpose. The agenda report states that they “serve no public function nor have [any] known [use] in the future,” and “you should take that literally,” Assistant Manager Robert Hiss told Girtz. The lake was originally a reservoir, but it only holds 13 million gallons, which is just one day’s water supply for Athens now, according to Public Utilities Director Frank Stephens.

“I hope this could be considered for affordable housing,” Link said. “That’s one of our great needs, and it’s a good location.” But as Girtz pointed out, the commission voted long ago to keep the sewer line needed for dense development away from that part of town to protect Sandy Creek, which feeds into Athens’ water supply.

Other commissioners were skeptical of selling the property at all. NeSmith contended that the dam was a New Deal-era stormwater retention project, and is still serving that use. “I’m gonna have to be convinced this thing’s not needed,” he said.

Commissioners also discussed several transportation projects. The Transportation and Public Works Department has proposed a $2.6 million plan to fix intersections on College Station Road that are clogged with traffic, especially during the afternoon rush hour.

And they talked about whether to issue bonds to get started on the $106 million T-SPLOST project list voters approved earlier this month. “We’re wasting a whole year here by really doing nothing,” said Commissioner Mike Hamby, who argued vehemently for bonds to get started on the Clayton Street downtown streetscape project, which has been sitting around since 2005. County staff have argued that bonds aren’t necessary, though, because they can complete all of the project within six years, or one year after the tax expires. Commissioners will revisit the issue at a work session Nov. 28, where they will also be discussing pedestrian improvements for 2018.