Still No Consensus on Fate of West Broad School 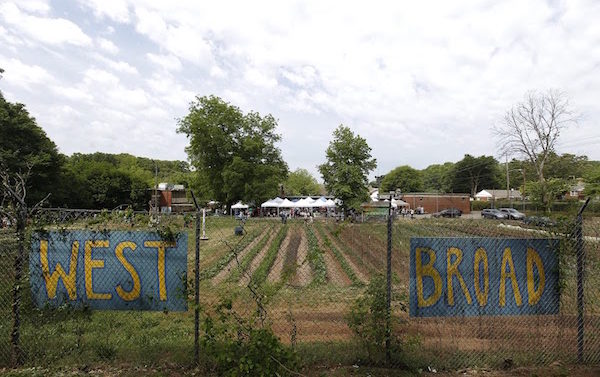 More than a year has passed since a committee convened to figure out how to revitalize the impoverished but potential-filled West Broad neighborhood while halting the coming gentrification that could push out many longtime residents, and some members are frustrated as progress seems to have ground to a halt.

“I’ve been to too many meetings,” said Willa Fambrough, a neighborhood resident and vendor at the West Broad Farmers Market. “Too many meetings and too much talk. It’s time to move.”

The committee—which includes representatives from the Athens-Clarke County government, the Clarke County School District, Athens Housing Authority, Athens Land Trust and the neighborhood—met most recently on Oct. 19 and could not come to a conclusion on how to move forward.

A feasibility study released earlier this year suggests numerous projects big and small, from redeveloping the Rocksprings Homes public housing project to a trail along Brooklyn Creek to an improved network of sidewalks. But the focus remains on the fate of the long-vacant West Broad School—the reason the committee formed in the first place.

At the most recent meeting, Commissioner Mike Hamby, who chairs the group, pushed to turn the school into a job-training center with a community kitchen, similar to facilities he’s seen in places like Asheville, NC. However, the deadlocked school board has repeatedly punted on deciding what to do with the building, and the process was set back when new superintendent Demond Means came on board in July. At a property committee meeting that very day, board members argued about whether the school is an appropriate place for the land trust’s community garden, which is operated largely by CCSD students, and the farmers market, where neighborhood residents sell produce and other goods.

The issue has been framed at times as the garden versus preserving one of the city’s last remaining segregation-era black school buildings, but in reality the issue is parking. School officials have designs on expanding the career academy, also housed at H.T. Edwards, which would require moving out administrators. CCSD’s initial plan for the building was to move central-office employees there and pave over the garden for parking. If the garden were to remain, parking would have to be found elsewhere.

The feasibility study suggested three options for preserving the garden and presented other options besides CCSD offices for renovating the building, including turning it into space for community nonprofits and a hybrid with both CCSD and nonprofit space.

Committee member Donna Thurmond suggested moving on from the West Broad School in the search for a “catalyst project” to jumpstart neighborhood revitalization, perhaps by starting with a pathway between the library and Clarke Middle School. “Every time we come up to [the] West Broad [School], we stop,” she said. “We have other projects we can move up the list. Let’s get going, let’s get moving with something.”

Some smaller projects are already underway, Hamby noted, such as filling in sidewalk gaps on Broad Street, West Hancock and other neighborhood streets, and if voters approve a transportation sales tax in November, $4 million will be available for the corridor. School board member Linda Davis demanded a sidewalk on Evans Street, which is seeing increased cut-through traffic since the new Boys & Girls Club opened. It doesn’t meet ACC’s criteria for vehicular speed, Commissioner Melissa Link said, but she and Hamby promised to seek an exception.

Funding is another issue—government and nonprofit resources are limited. The committee has been talking about working with the Warren Buffett-funded foundation Purpose Built Communities, but local activist Bertis Downs said he’s skeptical it’s the right partner for Athens. As he and Hamby said, Athens lacks a benefactor like Buffett or Tom Cousins, the developer who turned around Atlanta’s East Lake neighborhood. And grants are hard to come by until specific projects are identified, ALT Executive Director Heather Benham pointed out.

Meanwhile, redevelopment still looms over the Varsity property on the north side of Broad, where commissioners declared a moratorium six months ago. Neighborhood residents haven’t been able to agree on what type of zoning or other protections they want put into place, so Link said she is talking about bringing in the UGA College of Environment and Design and the Georgia Trust for Historic Preservation to help facilitate discussion.