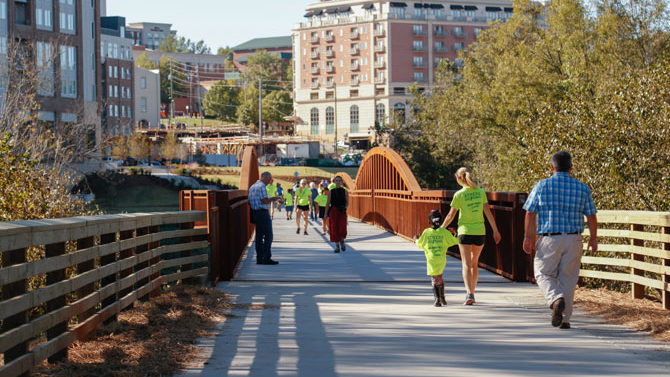 Several hundred people gathered just east of downtown on Friday to witness something nearly two decades in the making: the opening of the first leg of the Firefly Trail.

“There are so many people who’ve waited so long for this, and it’s finally happened!” said trail advocate Mark Ralston. And it only took 17 years, three mayors and numerous commissioners, other county officials and visionary activists to make it happen.

The first leg of the trail is only a few hundred yards long, running from a trailhead off East Broad Street, across the street from the multimodal center. It’s a wide cement path with the massive student housing development The Mark—where developer Wes Rogers wasted a huge opportunity by not incorporating any commercial space along the trail—looming to the west. A new pedestrian bridge passes over Wilkerson Street to Dudley Park.

And that’s it—for now. Construction, funded by local sales taxes and a federal rails-to-trails grant, will continue on to Old Winterville Road before Athens-Clarke County runs out of money. For now, cyclists will have to pedal down into Dudley Park and back up through switchbacks. But if the T-SPLOST referendum passes Nov. 7, the $16 million included for Firefly Trail will be enough to replace the partially demolished Murmur trestle and extend the trail all the way out to Winterville. From there, a private nonprofit is working to extend it through Oglethorpe County to Union Point. The hope is that it will function not only as a flat commuter route for Eastsiders—taking traffic off congested Lexington Road and Oconee Street—and a recreational/exercise opportunity for all Athens residents, but a tourist destination. A 2016 Georgia Tech study estimated that the full 39-mile trail would draw 1 million visitors a year and create a $15 million economic impact. New development, such as a QuikTrip, is already coming to the blighted corridor.

T-SPLOST also includes funding to extend the North Oconee River Greenway farther south to College Station Road and tie it, along with Firefly Trail, to the park-and-ride lot at the Loop, creating further opportunities. But only if voters agree to tax themselves.