ACHF and Greater Bethel Team Up to Save Building 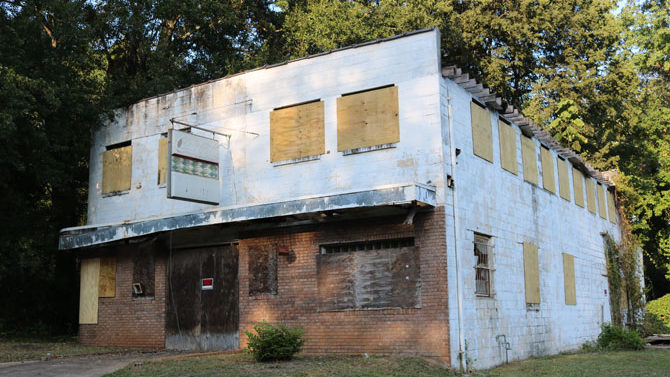 The Clarke County school board member, who grew up nearby, was one of about 40 people who attended a meeting Sept. 28 at Greater Bethel AME to discuss restoring the building, which has been sitting vacant for years. The church is now working with the Athens-Clarke Heritage Foundation to fix it up, and the meeting was called to ask for opinions on what it should become.

The building served as an American Legion post from 1947–1963, then was empty for two years before reopening as the Frank C. Maddox Community Center, Athens’ first licensed daycare for African-American children, named for Greater Bethel’s pastor at the time. (The current pastor is the Rev. Karen Bennett.) Later, the late civil rights activist Evelyn Neely took it over under the Lyndon Johnson Administration’s Model Cities program.

Even as it served as a daycare, the building continued to be used for dances, wedding receptions and other social functions. As many as 1,000 people would pack inside, spilling out onto a balcony that’s no longer there. A young James Brown once graced the stage downstairs. Upstairs were classrooms and offices. The Greater Bethel congregation also held services there after their original Broad Street church burned down while the new one, on Rose Street, was being built.

No one could say for sure exactly when the building was abandoned, but the exterior is structurally sound, said Turner Douglas, a contractor and ACHF trustee. He suggested removing the sagging second-story floor and walls to create a high-ceilinged one-story hall, but added that it would be up to the community to decide. In the meantime, Whitsel Construction, a company that specializes in historic preservation, has boarded up the building for safety reasons.

Most attendees advocated returning the building to use as a community center: renting it out for meetings, banquets and wedding receptions, turning it into a music venue and/or offering arts and music classes. One young man suggested that it should become a locally owned business—something like The Grit, “but less salty,” or an alternative to Kroger or Walmart.

Money will, of course, be an issue. Abating hazardous materials will cost about $40,000, and a new roof will run $20,000–$25,000, according to Douglas. But church and ACHF leaders said they’re confident the project will come to fruition.