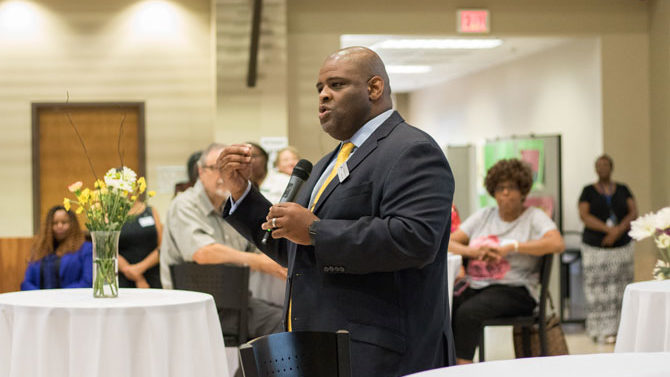 Demond Means has wasted little time making his mark on the Clarke County School District since taking over as superintendent last month.

In public appearances over the past few weeks, the former suburban Milwaukee superintendent has repeatedly described “hitting the reset button” and “moving forward together.” He’s making a clean break from the Philip Lanoue administration, which began with promise and peaked with a National Superintendent of the Year award, but ended in scandal and broken trust.

Lanoue resigned last December still under a cloud from mishandling an alleged sexual assault at Cedar Shoals High School. To his credit, he made a number of reforms after the public outcry—such as hiring additional security, setting a revision of the student code of conduct into motion and putting policies into place to improve communication among principals, police and administrators—but Lanoue steadfastly resisted calls from a grand jury, the local NAACP chapter and others to conduct an outside investigation.

Although he told Flagpole it’s premature to say much about it, Means plans to do just that, which ideally will bring closure to the community’s healing process, as well as reveal any additional lessons the district can take away from its previous missteps. He also proposed a new strategic plan for the district, “data-driven” and written with public input, at his first school board meeting earlier this month.

Means has also said he intends to empower teachers, many of whom felt ignored and unappreciated under the previous administration. He has put an emphasis on listening and on social justice and equity.

For example, Means announced at a meet-and-greet last week that he is extending after-school programs to all of Clarke County’s 14 elementary schools. (The three schools without them—Stroud, Fowler and Gaines—serve primarily African-American children on the Eastside, two historically marginalized groups in Athens.) Details to come, but Means said, “We’re getting these programs up and running as soon as we can.”

Whereas Lanoue waited a month to tell parents, teachers and students about the Cedar Shoals incident—and might never have disclosed it had the Athens Banner-Herald not found out through the police—when a student posted a bad joke involving the KKK on social media soon after white supremacists descended on Charlottesville, VA, Means moved quickly to inform the community that the situation was being dealt with.

Perhaps most encouragingly, Means has some skin in the game, other than his $209,000 salary. His daughter, Hannah, just started kindergarten at Timothy Road. “We wanted to live in a community where we could raise her, and she’d be safe and learn,” Means said. That’s what all parents want. Here’s hoping he’s up to the task of providing it. [Blake Aued]

Means will soon be working with a new Board of Education president, as a new policy approved earlier this month will end Charles Worthy’s 12-year run.

The school board voted 7-2 Aug. 10 to ban board members from serving consecutive terms as president or vice president. Supporters said the policy will allow more board members to serve in leadership roles. Worthy, however, noted that any board member could have run against him, and criticized the move in light of of Means’ recent hiring.

“It’s a bad move,” he said. “I disagree with it. The timing was just awful with Dr. Means moving into the school district.”

Worthy frequently lectures the board about not overstepping its bounds and letting the superintendent do his job. It remains to be seen whether the next president will give Means the same leeway.

Crossing Baxter Street on foot won’t be getting any easier as Athens-Clarke County commissioners slowly back away from a proposed pedestrian refuge island near the restaurant home.made.

An original proposal for a full-fledged island was scaled back to a smaller refuge after home.made owner Mimi Maumus expressed concern that it would prevent cars from turning left into her parking lot. (The smaller version would leave space for a couple of cars to stack up in the turn lane.) Last month, Jeb Bradberry told the commissioner he and some other nearby property owners had not been consulted. After traffic engineer spoke to the surrounding business and property owners, all seven—including Maumus—said they don’t want a refuge at all, according to ACC Manager Blaine Williams.

But Baxter still needs traffic calming, especially on the downhill slope near home.made, Commissioner Melissa Link said at the Aug. 15 agenda-setting meeting. “I would think these business owners would want traffic to slow down in front of their businesses,” she said. “They might see the businesses there and stop and shop.”

Link hinted that she may craft a commission-defined option ordering further study. Paris Street or Collins Avenue, where there is multifamily housing and several bus stops, could be an alternative, Commissioner Kelly Girtz suggested, but Williams said there isn’t enough time to consider other options before a scheduled vote Sept. 5.

One item commissioners look poised to approve is a spay/neuter requirement for stray cats brought to the ACC animal shelter. The commission recently approved a policy requiring all stray dogs to be microchipped, and on their second trip to the pound, spayed or neutered. Now those requirements will be extended to cats. “They only get a few cats a year, so it’s not significant to the workload,” Commissioner Jerry NeSmith said. “It’s significant to the well-being of those cats and their reproductive health.”

They’re also likely to sign off on a $400,000 contract to create in-depth master plans for the Atlanta Highway and Lexington Road corridors—which are badly in need of redevelopment—piggybacking off bare-bones studies done by the Urban Land Institute in 2013 and 2015, respectively. A committee consisting of local planning, transportation and economic development officials has recommended a respected planning and design firm, Kimley-Horn—but commissioners Mike Hamby and Jerry NeSmith, who represent Atlanta Highway, aren’t happy they were left out of the process. Williams responded that if one or two commissioners were allowed input, it wouldn’t be staff’s objective recommendation, and commissioners are free to reject that recommendation.

“It would’ve been nice to have some involvement,” Eastside Commissioner Sharyn Dickerson said. “I understand the hesitation of staff, but I understand our position, too. It’s a slippery slope.”