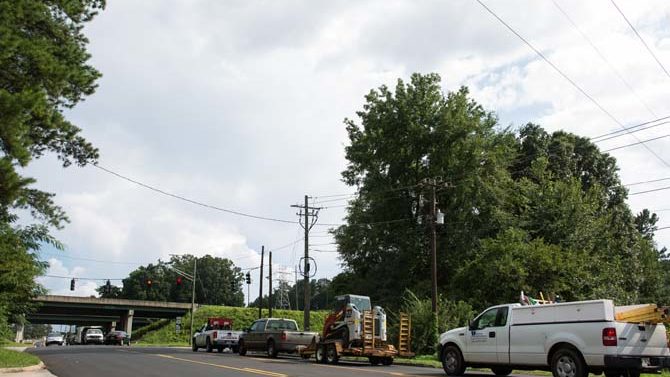 Pushback on the recent road diet on Chase Street reducing it from four lanes to two with a center turn lane is the T-SPLOST debate in a microcosm, and one the community’s been fighting over for 20 years: Are roads for cars or people or both?

After business owners on Oneta and Newton Bridge complained about cars and trucks backing up waiting to get on the Loop during rush hour, the county Transportation and Public Works Department is recommending that the commission reverse the new striping—not only returning Chase north of the Loop to four lanes, but eliminating the bike lanes striped between the Loop and Boulevard.

As both BikeAthens and Complete Streets Athens have noted, this situation illustrates two major loopholes in ACC’s Complete Streets policy. For one, the policy is focused solely on cars. First and foremost, the issue in deciding whether to reduce car lanes from four to three is vehicle safety—crashes are more common when vehicles stop in a travel lane to turn left, then turn across two lanes of traffic. Bike lanes are just something to do with the leftover pavement.

The sole criteria TPW used in its most recent Chase Street analysis was how long vehicles are delayed (about 20 seconds in the morning and a minute in the afternoon). That doesn’t take into account the dangers faced by residents who live along Chase who bike on the street or drivers who had to turn out into four lanes of traffic.

The TPW report states that there’s no obvious destination for the Chase bike lanes, but with Southern Mill in the process of being rehabbed—it will include apartments, a Creature Comforts brewery and other walkable/bikeable destinations—that will change soon.

Secondly, roads of less than four lanes aren’t eligible for review. It’s only because the four-lane portion of Chase came up for repaving that Link and Commissioner Kelly Girtz were able to shoehorn in the bike lanes to Boulevard and crosswalks near Chase Street Elementary.

The commission will take up the issue again at its Tuesday, July 18 meeting.

Also at that meeting, commissioners will take comment once again on T-SPLOST. They also heard from constituents on that issue at the July 5 meeting.

Sidewalks, trails and bike lanes “are luxury things that you use leftover money for,” Five Points resident Leslie Sinyard said during a public hearing on potential sales-tax-funded transportation projects. And the additional 1 percent sales tax would hurt the poor and drive shoppers to Oconee County to save that penny, she argued. SPLOST—another 1 percent sales tax—used to cover roads, Sinyard said, “but I don’t know what happened to those dollars.”

The state has cut appropriations to local governments for local roads, and a quarter of the $100 million T-SPLOST, if voters approve it in November, would go toward easing a backlog of road repaving, with most of the remainder earmarked for sidewalks, bike lanes, transit, the North Oconee River Greenway and Firefly Trail.

Not all cyclists and pedestrians are Spandex-clad hobbyists, though. BikeAthens gave away 70 bikes in the past year and repaired another 100 for people with no other mode of transportation, Executive Director Tyler Dewey told the commission. “Yes, bike lanes and sidewalks will benefit people from low-income communities,” he said.

Lauren Blais, a member of the citizens’ advisory committee that recommended the 14 projects currently on the list, urged commissioners to look to pavement maintenance rather than bike and pedestrian projects if they want to add something, such as improvements to Clayton Street downtown. “I’m concerned this T-SPLOST list won’t be marketable, won’t be passable, if [bike and pedestrian infrastructure is] cut, because they’re already funded at reduced amounts,” she said, warning that proponents will mobilize if such cuts take place.

In other business, the commission also voted to table a proposed pedestrian island on Baxter Street near the restaurant home.made after nearby property owner Jeb Bradberry asked for more time to look at the plans. Home.made owner Mimi Maumus signed off after ACC reduced the size of the island to avoid blocking her parking lot. “Her customers have some pretty close calls crossing Baxter Street,” Commissioner Melissa Link said.

And the commission approved an ordinance requiring all dogs entering the ACC animal shelter to be microchipped (at a cost of $5–$10), and spayed or neutered the second time they wind up at the shelter, unless the owner provides proof they’re used for breeding.