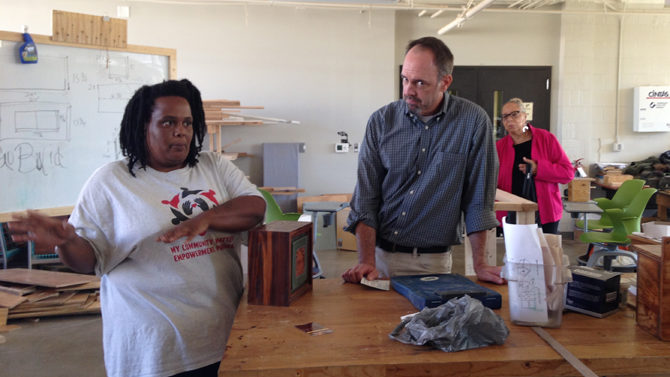 “The challenges we face here in Athens are not unique,” Commissioner Melissa Link said during a presentation May 26.

On a trip to Asheville—where most of the city’s historically black neighborhoods have been demolished—in November, a group visited Green Opportunities, a nonprofit that collaborates with the local school district and housing authority. It’s housed in an old school (much like the vacant West Broad School) that doubles as a museum of Asheville black history, and provides a community center and job training for low-income residents. The GO program includes a community kitchen where food is prepared to be sold in local grocery stores, and anyone can walk in and eat for free. “In today’s economy, you can bake cookies here and sell them across the world,” said ACC Commissioner and committee co-chairman Mike Hamby.

In October, another group attended a Purpose Built Communities conference in Birmingham. Purpose Built, funded by billionaire investor and philanthropist Warren Buffett, grew out of the successful effort to revitalize Atlanta’s East Lake neighborhood in the 1990s with mixed-income housing, cradle-to-college education and community wellness programs, and now provides free assistance to cities, including Athens, that are looking to replicate the East Lake model. Link said she was impressed by how Birmingham redeveloped its public housing into neighborhood-scale cottages.

The West Broad Feasibility Study—which is a set of ideas, rather than a detailed master plan—includes a proposal to redevelop Rocksprings Homes, a cluster of low-slung apartment buildings next door to Clarke Central High School, into denser two- to four-story buildings, with a mix of market-rate, subsidized and public-housing units, similar to what the Athens Housing Authority did in converting Jack R. Wells Homes (aka Pauldoe) into Columbia Brookside.

The study includes four concepts for the West Broad School, with options to keep the Athens Land Trust’s existing community garden or replace it with parking, and to incorporate space for nonprofits, such as a community kitchen, alongside Clarke County School District administrative offices.

Another big idea is a greenway along Brooklyn Creek, which would be expensive and difficult to construct, but could be a “game changer” for the neighborhood, said consultant Bob Begle of Lord Aeck Sargent. And the study includes many smaller, easier-to-implement ideas, like wider sidewalks and improved pedestrian connectivity around schools and the library.