Athens’ Racist Past Still Haunts Us 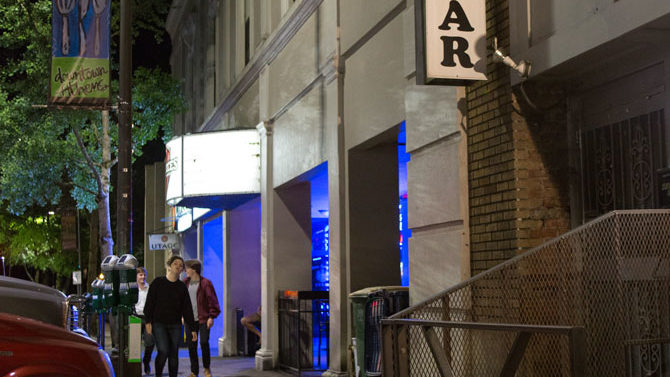 In his new book The Potlikker Papers: A Food History of the Modern South, John T. Edge rehashes the story of Lemuel Penn, a black Army officer driving from Fort Benning to Washington, DC who was followed from Athens to Madison County in 1964 and shot to death by local Klansmen afraid he intended to test the recently passed Civil Rights Act banning discrimination on the basis of race at “public accommodations” like bars and restaurants.

Those Klansmen had been hanging out that night at the Open House, a restaurant run by Herbert and Blanche Guest. The former was charged with but never convicted of violating Penn’s civil rights; the latter was a member of the KKK’s ladies’ auxiliary.

As a UGA undergraduate in the 1980s, Edge recalls warding off hangovers with greasy post-party breakfasts at the Open House: “At her counter, with a couple of sausage patties and a pool of grits before me, I chose to believe that a place like Blanche’s had been washed clean of past taints. Like so many whites, I chose to avert my gaze from that ugly history, until it was impossible to look away.”

Athens-Clarke County Commission candidate Tommy Valentine made a similar point recently—that Athens has a dark side, one we’ve collectively chosen to gloss over in favor of an image of ourselves as a welcoming, inclusive community, snug in our bubbles in Normaltown and on West Washington Street. But in one Prince Avenue storefront window hangs a Confederate flag. A few blocks down from the 40 Watt, African Americans are routinely turned away from college bars. A few blocks south, an obelisk erected to perpetuate the myth of the Lost Cause juts into the sky, even as New Orleans removes its monuments to a “fake news” version of the past.

We’ve made some strides, of course. In 1938, when UGA found slave remains during Baldwin Hall construction, the university unceremoniously dumped them out by the water treatment plant. When they found more slave remains while expanding Baldwin Hall in 2015, they at least had the decency to say a few prayers after moving them and, after much prodding by black community leaders, made some effort to discover who they were in life.

In the 1960s and ’70s, and even up through the ’90s, the city tore down black schools and whole neighborhoods in the name of urban renewal. Today, at least the community is having a discussion about preserving the West Broad and West Hancock neighborhoods, threatened by gentrification and encroaching development, including a potential mega-project on the site of The Varsity—the same Varsity, where, in 1964, the KKK and black civil-rights activists walked picket lines outside. But there are still those who argue that only grand homes like that of ardent secessionist and slave owner T.R.R. Cobb are worth saving.

After the recent controversy over Confederate-themed bar General Beauregard’s (the fact that a such a bar can draw enough of a clientele to stay open really tells you all you need to know), dozens of anecdotes surfaced about college bars using dress codes and bogus private events as excuses to keep out minorities. Last November, that prompted the commission to pass a local anti-discrimination ordinance targeted at bars.

Soon, that ordinance will be tested for the first time. The facts are clear: In April, African-American brothers Kendrick Bullock and Broderick Flanigan tried to go into the Clayton Street bar 9d’s. While Flanigan was allowed in, doormen told Bullock his pants were too saggy. As Flanigan informed them in a videotaped encounter, 9d’s did not have its dress code posted outside, as required by the law. They filed a formal complaint with the ACC attorney’s office.

“They create these certain invisible barriers,” Flanigan said. “They keep people out of certain spaces or places. What it does is chip away at the morality of the community.”

9d’s owner Mark Bell said he didn’t know when the ordinance took effect, but in legal matters, ignorance is generally not a defense. (Anyway, he could have just asked his mom, ACC Commissioner Diane Bell.) Although Mark Bell spoke out against the ordinance—which, for the record, his mother voted for—on the grounds that it singles out bars, let’s be clear: He’s not a bigot. He once ran a gay nightclub. And last week, he did finally post a sign listing the dress code outside 9d’s.

The complaint inevitably sparked lots of chatter online, with far too many commenters focusing on the irrelevant issue of whether people should pull their pants up, and others arguing that businesses have the right to refuse service to anyone. Will we ever learn?

Valentine will have some competition in the District 9 commission race. School board member Ovita Thornton is running as well, and will make a formal announcement at a date yet to be determined. (It was scheduled for June 24, but instead Thornton will be on a church mission trip to Honduras on that date.)

Meanwhile, state Rep. Stacey Evans (D-Smyrna) has announced she’s running for governor, setting up a likely primary battle with House Minority Leader Stacey Abrams (shades of Denson vs. Denson). Evans, a Double Dawg, donated $500,000 to UGA two years ago to set up a scholarship fund for students who, like her, are the first in their family to attend college. She’s close to 2014 gubernatorial candidate Jason Carter, so it’s unlikely he’ll try again next year.