Legislature Says Yes to Campus Carry, No to Tax Incentives for Musicians 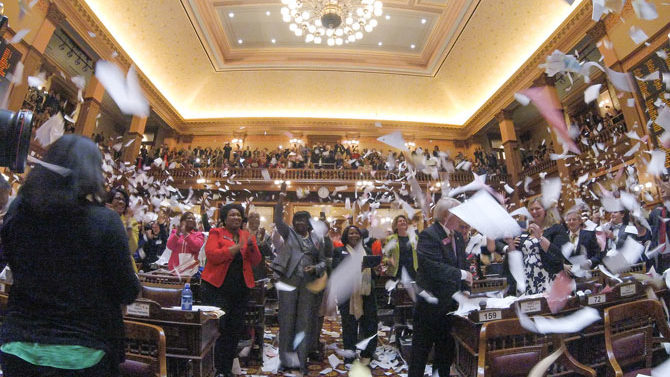 A joint House and Senate committee had Georgia’s thousands of music-industry employees excited about the chance to do for music what state tax credits have done for film production. But when it came time to execute, the legislature flubbed it as badly as Mariah Carey on New Year’s Eve.

The only bill that came out of the study committee and passed was one sponsored by committee chairman Sen. Jeff Mullis (R-Chickamauga) that gives tax credits to bands that rehearse in Georgia for at least a week before starting a tour. But to be eligible, they have to spend at least $500,000. “Certainly no Athens band is going to benefit from this, because the threshold is set so high,” unless R.E.M. comes out of retirement, said Rep. Spencer Frye (D-Athens), who served on the study committee.

Another bill that would have exempted royalties from state income taxes—encouraging songwriters to live in Georgia rather than Nashville—was gutted in the Senate. Frye’s bill offering recording studios in blighted “opportunity zones” a $3,500 tax credit for each job created is stuck in committee.

But there might be an encore. Those bills will be back next year, Frye said. “My objective was to create opportunities for small and mid-level bands and musicians,” he said. “I don’t believe we achieved that goal with the legislation we passed, but I will continue to try to create those opportunities.”

Just before the 2017 legislative session ended early Friday morning, House and Senate leaders came to an agreement on “campus carry.” The bill would legalize guns on the UGA campus (and others) for those with concealed-carry permits, except at athletic events and disciplinary hearings or in fraternity and sorority houses, dorms, daycares and areas where high-school students are present. The bill now goes to Gov. Nathan Deal, who vetoed similar legislation last year, though that bill included fewer exceptions.

Another bill of particular interest to Athens—which would have required colleges to report sexual assaults to police and barred them from investigating rapes unless charges were filed—died before Sine Die (Latin for “without a day”). It was heavily criticized by sexual-assault survivors and advocates. “That was one of those bills that was caught up in House-Senate issues,” Rep. Regina Quick (R-Athens), a cosponsor, told The Red & Black.

The legislature did pass new, expanded boundaries for the Athens Downtown Development Authority, which will raise funding for ADDA services and projects through a one-mill tax on additional properties where owners opted to join the district (though not The Mark, the largest development downtown).